On February 14, 1979, thirteen days after the Ayatollah Khomeini returned to Iran to establish an Islamic republic, several armed groups stormed the U.S. embassy in Tehran. With bullets flying, Ambassador William Sullivan ’43 sprang into action, calming staff and ordering U.S. Marine guards to hold off the attackers by firing over their heads as he shepherded embassy employees to a safe room on the second floor. Sullivan told the New York Times: “They shot up my home, my office and the chancery. We telephoned the Khomeini people, and they arrived in the nick of time—an interesting Valentine’s Day.”

Newsweek noted: "The attack on the U.S. Embassy in Tehran last week showed William Sullivan for what he is—shrewd, stylish and incredibly cool." The incident was one of the highlights in a busy diplomatic career that in 1979 prompted the Associated Press to call Sullivan—who died in an assisted living facility in Washington, D.C., on October 11, 2013, one day before his 91st birthday—"one of the most successful and controversial foreign service officers of his generation." 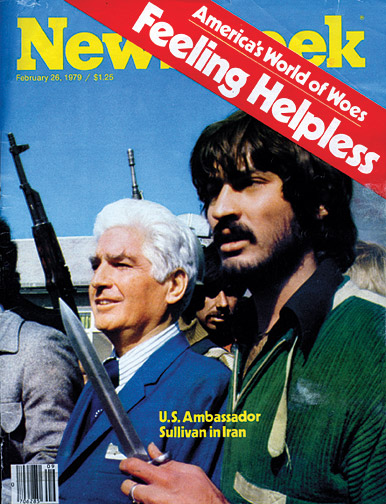 Much of the controversy stemmed from his time as U.S. ambassador to Laos from 1964 to 1969, when he was one of the youngest career diplomats to hold the title of ambassador. As the U.S. Department of State’s leading expert on Southeast Asia at the time, Sullivan oversaw President Lyndon Johnson’s secret bombing campaign against North Vietnamese troops who were moving freely from North to South Vietnam along the Ho Chi Minh Trail, part of which ran through Laos.

Sullivan oversaw the campaign closely, even choosing targets for individual bombing runs. Many Laotian villages suffered heavy civilian losses in the bombings, which outraged the growing antiwar movement in the United States. New York Times journalist Anthony Lewis editorialized against Sullivan’s later appointment as Iranian ambassador because of the Laotian bombings, and, when Sullivan was chosen to receive an honorary degree from Brown in 1973, faculty members prepared to demonstrate at Commencement. A letter written and circulated by history professors Tom Gleason and Eric Widmer stated, “We find it impossible to believe … that the judgment of history on the American action in Indochina will be—or can be—other than deeply negative. We feel that those who made our policy there—or executed it at the highest level—should not be publicly commended for doing so.” The controversy dissipated when Sullivan was unable to travel to Brown to receive his degree due to an engagement in Paris.

Sullivan’s Parisian engagement was to accompany Henry Kissinger to resume talks with the North Vietnamese to try to negotiate a settlement to the war in Vietnam. As Kissinger’s top aide at the talks, Sullivan proved invaluable as he helped coordinate the negotiations that produced the Paris Peace Accords. A grateful Kissinger called him “a hard-nosed professional in the field of statecraft.”

In 1947 he earned an M.A. from Tufts’ Fletcher School of Law and Diplomacy, where he met his wife, Marie Johnson. He then joined the Foreign Service, and, despite his specialty in Latin American affairs, he was sent to Bangkok, beginning his involvement in Southeast Asia. His career leaped forward in 1961, when W. Averell Harriman, head of the delegation for the Geneva conference on Laotian neutrality, named Sullivan his assistant, promoting him over dozens of more-experienced delegation members.

Sullivan’s career also included postings in Calcutta, Rome, and The Hague. He became U.S. ambassador to Laos in 1964, and in 1969 he returned to Washington as deputy assistant secretary of state for East Asian and Pacific affairs. From 1973 to 1977 he was U.S. ambassador to the Philippines, and in 1977 he began his last posting as U.S. ambassador to Iran. His disagreement with Carter Administration policy there led to his retirement in 1979. With his wife he moved to Cuernavaca, Mexico, where he wrote two books, the 1981 Mission to Iran and the 1984 Obbligato 1939–1979: Notes on a Foreign Service Career.

Reader Responses to A Hard-Nosed Diplomat