As Rhode Island Governor Lincoln Chafee ’75, a Democrat, sees it, today’s polarized politics all started with the presidential campaign of Republican Barry Goldwater in 1964. Although Goldwater was trounced, his right-wing agenda, which included opposition to the civil rights movement, managed to win several Southern states that had traditionally voted Democratic. Over the next few decades, Chafee said, the Republican Party exploited this racial divide to win over the South. 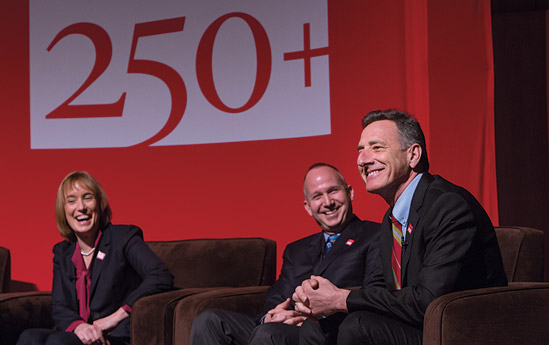 Scott Kinglsey
Governors Maggie Hassan '80 (New Hampshire) and Jack Markell '82 (Delaware) laugh as Brown parent Peter Shumlin (Vermont) jokes with the audience.
“Now you just have pure red states and pure blue states,” said Chafee, a former Republican moderate who turned Independent and then Democrat. “That’s what’s brought us to this divide that we are trying to bridge today.”

Chafee sat on a panel with three other governors from the Northeast: New Hampshire’s Maggie Hassan ’80, Delaware’s Jack Markell ’82, and Vermont’s Peter Shumlin. (“I’m the only person on this panel who got rejected from Brown,” Shumlin quipped.) All the governors are Democrats—Brown invited the Republican governor of Louisiana, Bobby Jindal ’92, to participate, but he was unable to attend—and so it was no surprise that the panelists lay most of the blame for today’s partisan fighting and deadlock on conservatives.

The speakers stressed the differences between politics on the state and federal levels. At the state level, they agreed, politics is all about getting things done, while on the national level party unity dominates. Governors, Markell said, “are measured on whether we’re putting people back to work, whether we’re improving schools, whether we’re good stewards of the taxpayers’ money. That’s not what drives the folks in Washington. So much of it is scoring points against the other party.”

Hassan said voters want their local politicians to be like them. “Most people in their daily lives … solve problems all the time. They do so without regard to their political parties,” she said. “That’s what they expect from their elected [state] leaders.”

It was extreme partisanship that led the Tea Party to lose support in New Hampshire after scoring major gains in 2010, Hassan said. With control of both chambers of the state legislature, Republicans cut funding to higher education and slashed cigarette taxes, “giving a lot of us the ability to say the Tea Party believes young people should go to school less and smoke more,” she said.

In 2012, Democrats regained control of the state House of Representatives, and Hassan beat her Republican opponent. Their mandate, Hassan said, was to “attend to the challenges that we face in our state … and to really not let partisan politics divide us.”

Shumlin of Vermont also said there’d been a swing toward bipartisanship in his state. “One of the beauties of Vermont,” he said, “is that our Republicans don’t drink too much tea.”