Beatrice Coleman ’25, a retired Rhode Island teacher, died April 3, seventeen days shy of her 110th birthday. At the time of her death, she as Brown’s second-oldest graduate. 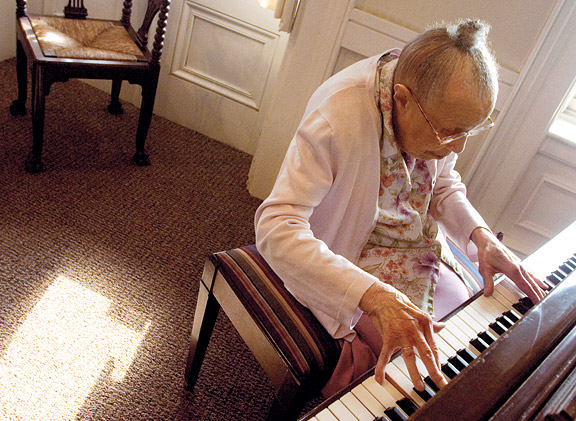 Mary Beth Meehan
Bea Coleman plays the piano in her assisted-living home.
The granddaughter of slaves, Coleman grew up in Providence, reared by her mother, who worked as an errand girl for a local dressmaker, and by her grandfather, a watchman, and gradmother, a practical nurse-midwife. “They didn’t want me to cook, wash, iron, and wait on white folks,” she told the BAM.

Coleman wanted to attend Howard University, where two of Rhode Island’s first black doctors had gone, but her family couldn’t afford to send her so far away. She remained in Providence, living at home because black students weren’t allowed to live in the dormitories. “They had to lodge with colored families in town,” she told Jane Lancaster ’98 PhD in an oral history for the Pembroke Center’s Christine Dunlap Farnham ’48 Archives. Still, Coleman told the BAM, she didn’t recall being discriminated against by her fellow students. She majored in Latin and history and joined the African American sorority Alpha Kappa Alpha. Pembroke and AKA became her lifelong passions.

Even with a Brown degree, Coleman had difficulty finding a teaching job after graduation because of racial restrictions in the Providence schools. So she began her career teaching Latin in Pennsylvania and New Jersey. When Providence eliminated its restrictions, she returned home, where she directed a nursery school before joining the Emma P. Bradley Hospital’s school department. Announcing her appointment to its permanent staff in 1961, the hospital newsletter described her as “a Negro with attractive coloring and a mobile face that lights up when she talks about the children in her charge.” The article observed that staffers “marvel at her patience” with the most severely disturbed children, a compliment she laughed off. “I have no patience for those who should know better,” she replied.

Coleman retired from Bradley in 1969, and in 1970 she filled out a Pembroke reunion form asking for “My most rewarding experience since I left college.” Her reply: “To attend the graduation exercises of a former pupil from the R.I. School for the Deaf. Pupil was non-verbal while at Bradley Hospital, but quite alert.

A permanent member of the NAACP, Coleman was secretary of the New England Regional Conference. She was also president of the African American women’s organization The Criterion Club and served on the scholarship and public relations committees of the Rhode Island Association of Colored Women’s Clubs. She was also active in the Providence and Cranston Girl Scouts and the Salvation Army Settlement and Day Care Center. A longtime church organist, Coleman played the piano for her neighbors at Tockwotten House, the Providence assisted-living home where she spent her last years.

She had no children and remained single all her life. “I didn’t want no man telling me what to do,” she told the BAM. “It’s bad enough having a governor or president.