James Develin ’10 was a mechanical engineering concentrator at Brown, but his dream was to play in the NFL. “I knew if I didn’t at least try to play football as a living,” he says, “I would really regret it later in life.” 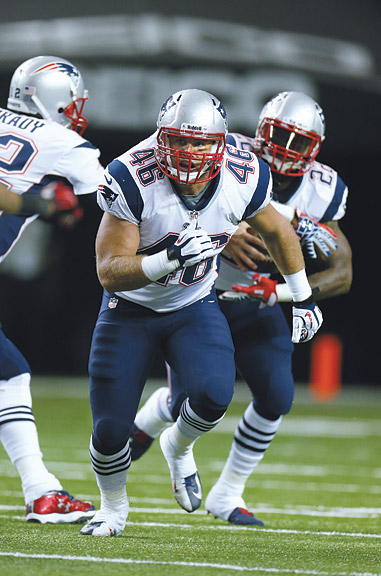 David Silverman
"This fullback thing might be my ticket to the NFL," thought Develin, who'd never had a rushing attempt at Brown. Last season he became a running option in Tom Brady's offense.

Develin’s path to the NFL was long and difficult. After graduation, he realized that even at 6 foot, 3 inches, and 250 pounds, he was too small to play defensive end in the NFL. He was also a little too slow to fit in as a linebacker. So he sat down with his agent and looked for an alternative.

“I had always enjoyed contact,” he says, “and I had pretty good hands, so we thought switching over to the offensive side of the ball would be a good option. I let people know I was now a fullback/tight end.”

After trying out unsuccessfully with the Cleveland Browns, he played for five weeks in the Arena Football League with the Oklahoma City Yard Dawgz. “That was a tough, gut-wrenching time in my life,” Develin says. “It wasn’t an easy living. I wasn’t making a lot of money. Things were looking grim.”

Next he played for the Florida Tuskers of the United Football League, where he made the switch to fullback. “I went down there for a tryout, and my agent said, ‘Don’t tell them that you never played fullback,’” Develin recalls. He made the team, and four games into the season earned the starting job. “That is when I knew I had a knack for this,” he says. He remembers thinking, “This fullback thing might be my ticket to the NFL.”

He spent the next two years on the Cincinnati Bengals practice squad, then moved on to the New England Patriots. His position on the team was far from secure. He began in 2012 with a spot on the practice squad, made the team, and was released and re-signed twice before the start of last season.

Develin played at fullback or on special teams in every game for the Patriots last season. His big break came last December against the Houston Texans when Develin, who had never had a rushing attempt either in college or in the NFL, heard his number called in the huddle. The ball was on the one-yard line.

“When Tom [Brady] called the play and I knew it was coming to me,” Develin recalls, “I put it in my brain that I’m either going to get in the end zone or I’m never going to get an opportunity like this again. So I knew it would take hell or high water to keep me out of that end zone.” Develin cradled the ball and fought off more than half the Houston defense, his legs churning until he crossed the goal line.

Belichick rewarded Develin by expanding his role during the final weeks of the 2013 season. Develin responded by hauling in a thirty-one-yard pass from Brady against Cleveland, and rushing the ball hard against Miami and Buffalo.

“He’s taken advantage of his opportunities to make the most of them,” Belichick said of Develin last season. “He’s been a consistent player for us in his role.”

Given the Patriots’ lack of depth at tight end, the coaching staff asked Develin to work out with that group during the offseason. Although it means another transition, Develin knows it’s another opportunity. “[Versatility] is the mantra of the NFL,” Develin says. “The more you can do, the better your chances are.”

The Patriots’ offense is known for its complexity, and Develin credits his Brown academic experience for teaching him how to learn. “It takes a lot of film study,” he says. “The demands of my schoolwork at Brown helped me in those aspects.”

Belichick continues to be impressed: “I think James is really one of our hardest-working guys.… It doesn’t matter whether it’s April in the offseason program or Wednesday of game week, or Sunday. He’s very consistent, very dependable. He’s a smart kid, works hard, tough, doesn’t say much, wants to know how to do his job, and goes out there and does it the best he can.”

Even Tom Brady has become an enthusiastic Develin fan.“I don’t think there’s a better fullback in the league,” Tom Brady said of Develin in August. “He brings so much in terms of his toughness, his attitude.… I can’t say enough good things about him.”