Norma Sturges ’45 braided her first rug in 1949. She figures she has braided about two each year ever since. Over those 65 years she has also become perhaps the country’s strongest advocate for recognizing rug braiding as an American folk art, as important a fiber art as quilting, weaving, and knitting. “It is just as important as any art form,” she says, “and it is uniquely American.” Because most rug braiders are women, Sturges, the author of The Braided Rug Book: Creating Your Own American Folk Art, believes the craft is also an often overlooked part of women’s history. Sturges even began teaching rug braiding in 1982 after she moved to Denver and “became aware that braiding was becoming a lost art.” 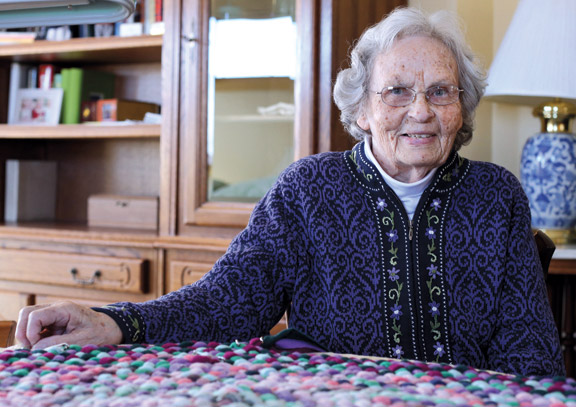 The craft scene may finally be coming around to her point of view. Last year, the National Historic Trails Interpretive Center in Casper, Wyoming, presented an exhibit that focused exclusively on her life work, and the Denver Art Museum recently contacted her to obtain a rug for its collection. In February 2014, Sturges was one of five recipients of a Wyoming Governor’s Arts Award. Her show in Casper may have been the first ever to consist entirely of braided rugs. Similarly, Sturges’s commission for the Denver Art Museum’s textile wing will be the first braided rug in the museum.

The origins of the braided rug go back to the latter part of the 18th century, when early Americans used mats made of braided straw as residential floor coverings. Toward the beginning of the 19th century, wool mills started to flourish in New England, and ready access to the material prompted braiders to use it for their rugs. Wool, they found, was both more long-lasting and more attractive than straw, and part of the recent focus on rug braiding could be due to the renewed interest in using natural materials. Even as commercial carpet production evolved, rug braiding remained a common form of craftsmanship into the early 20th century.

Braiding a rug can be time-consuming; Sturges may spend as many as 90 hours on her more elaborate creations. But braided rugs have advantages over machine-made ones. For one thing, they are more durable. Some of the rugs used in Sturges’s gallery display had been used for years and yet were still presentable as art pieces. “We picked many of them up off the floor,” she says.

Sturges has started a new rug with an innovative design she calls the swirl. The pattern is roughly the shape of a two-dimensional pinwheel, with each color expanding and then narrowing in a circular progression. She describes the 42-inch work as “just an experiment.”

While Sturges is thrilled that rug braiding is finally getting its fair shake, she wonders why it took so long. “I still don’t understand why it got overlooked,” she says.