A Way of Teaching

When Sarah Friedman ’97 worked in the Providence school system, she kept running up against bureaucratic obstacles. There were the rules and regulations in the teachers’ contract, the red tape that kept schools from ordering the supplies they needed, and the rigid curricula that didn’t accommodate the needs of individual students. But she also discovered something positive—there were a lot of truly talented teachers. 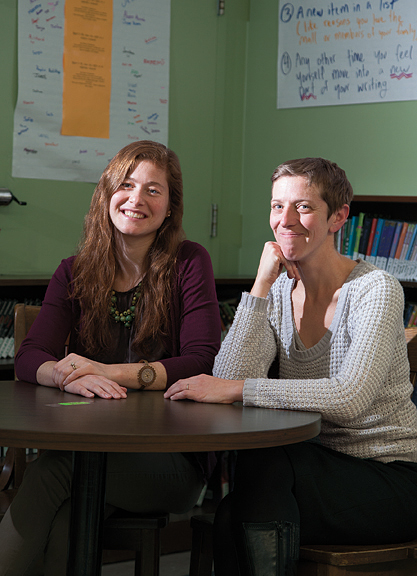 Dana Smith
Learning Community cofounder Sarah Friedman '97, right, with teacher Emily Spikell Sullivan '09 MAT.
In 2004, Friedman, along with Meg O’Leary, founded The Learning Community, a K–8 charter school in Central Falls, to give teachers maximum authority over their classrooms. “I have control over what I teach,” says fourth-grade teacher Emily Spikell Sullivan ’09 MAT. “I can’t imagine having more impact on what happens in the classroom.” Sullivan is one of more than twenty Brown alumni at the school.

The Learning Community has become a national model for charter schools in low-income neighborhoods. Nearly 90 percent of its 560 students qualify for the federal government’s free or reduced-price meal program for impoverished children. Yet the kids do better on standardized tests than students in the rest of the state. The Latino students score twenty-three points higher on reading exams and thirty-three points higher on math tests. New York Times columnist Joe Nocera called The Learning Community one of “the most promising reading experiments in the country.”

The school is a rare success in a city where the education system has long gone underfunded and mismanaged. When the Central Falls school superintendent fired all the teachers at the high school—they were eventually rehired—President Obama endorsed the decision as the kind of drastic measure needed to reform the nation’s schools.

Now The Learning Community has offered a new model. The reading curriculum is intense and immersive. Classes run twice as long as those at many public schools. Every student meets one-on-one with teachers. Classes follow the method laid out in the so-called Workshop Model: basically, students learn by doing. This means lots of reading aloud, group discussions about books, and daily writing exercises. Math is taught this way too. The kids learn about multiplication by imagining they’re running a chocolate factory. Now that The Learning Community’s first class of graduates is in high school, Friedman says they’ll be tracked to see if what they learned actually sticks.

Many of the kids’ families are poor, and many are immigrants, so the school employs social workers and counselors to help them navigate the health system or obtain food stamps. “We tell the parents, ‘Think of us as part of your extended family,’” Friedman says. The school even has an emergency fund that gives out loans to needy families. Friedman says that 90 percent of the recipients pay the money back on time. “We empower families,” says Sullivan. “We respect that they’re experts in raising their children. We honor what they bring to the table.”

In 2012, The Learning Community received a $1.8 million grant from several foundations to start the Teaching Studio, a professional development program for teachers in Rhode Island’s schools. It hosts conferences, offers long-term advising, and shares its curriculum. Nearly 200 public school teachers have participated. Teachers can spend time in The Learning Community’s classrooms or receive feedback on videos of their teaching.

One measure of The Learning Community’s success is its popularity. It has grown so quickly that its building, a former nursing home, is now too small.

Reader Responses to A Way of Teaching