Over the last few years, Americans have learned more than we can possibly understand about the complex of security and surveillance programs that now shape our national life. Yet we have little idea how much money is being poured into these projects, what they entail, who runs them, what their purposes are, or how effective they have been. All we know is that they have changed, probably forever, what it means to be American. 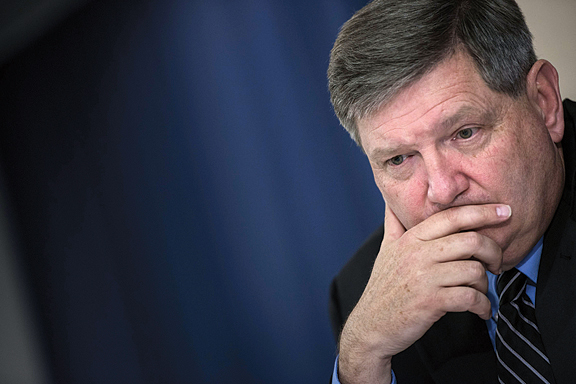 Brendan Smialowski/AFP/Getty Images
Pulitzer Prize-winnning reporter James Risen.
New York Times reporter James Risen ’77 is one of a handful of journalists who have managed to uncover small pieces of this vast and opaque puzzle. For his efforts he has won a Pulitzer Prize and faces a prison term. His supposed crime, while revealing that the CIA was involved in a computer attack against Iran’s nuclear program, has been refusing to identify his sources. In fact, his offense is more profound. Risen insists that the public has a right to information that government wants to keep secret. Such defiance is dangerous in any country, and the Obama administration is the latest to relentlessly pursue Risen. He has explained his dilemma succinctly: “Give up everything I believe in or go to jail.”

Risen calls his new book, Pay Any Price: Greed, Power, and Endless War, “my answer to how best to challenge the government’s draconian efforts to crack down on aggressive investigative reporting and suppress truth in the name of endless war.” It is a passionate, well-documented rant against the national security state that our beloved Republic has become, laced with a dizzying array of stories. There are tales of shrink-wrapped pallets of hundred-dollar-bills totaling billions that disappeared in Iraq; American campaigns to protect Saudis and Pakistanis deeply involved in anti-American terror; “surreal” collaboration between the CIA and Afghan drug lords; “the nightmare world that now consumes those ordered to take America to the dark side”; the role of KBR, a subsidiary of Halliburton, formerly run by Dick Cheney, which Risen calls “the company that allowed the Americans to go to war without a draft”; and President Obama’s “love affair with drones.”

When Risen calls the war on terror “a giant fraud,” he is saying something many Americans already suspect. His book, however, offers evidence most of us have never seen before. The reader does not know whether to laugh or cry.

“A decade of fear-mongering has brought wealth and power to those who have been the most skillful at hyping the terrorist threat,” Risen writes. “They make no money if they determine that the threat is overblown or, God forbid, if the war on terror ever comes to an end.”

In almost any country, a truth-teller like Risen would be in trouble. He is in trouble here and now. That makes him a hero of American journalism.