It all started at Brown—or so Gabriel Kahane ’03 realized last spring. The multitalented singer-songwriter-composer-creator-of-theater-works says it was an English class that made him see the artistic possibilities he wanted to explore. 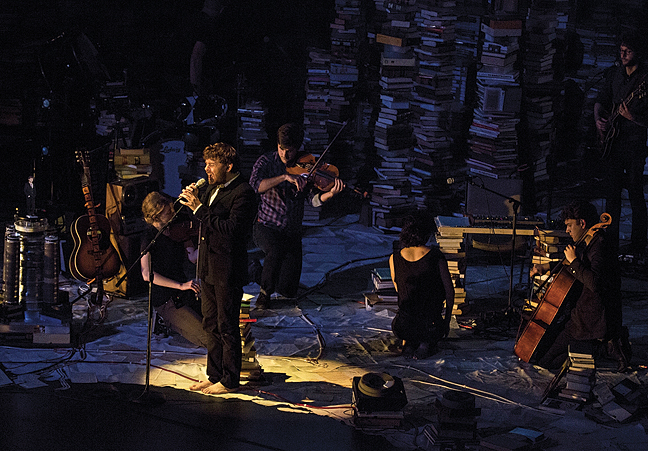 “Professor Arnold Weinstein offered us the option of doing creative projects instead of final papers” for his course on Faulkner, he explains. So Kahane responded to The Sound and The Fury by composing a song cycle.
The New York Times has characterized Kahane as “one of a generation of musically omnivorous composers whose music freely plumbs pop, musical-theater, and classical traditions.” Craigslistlieder was a song cycle inspired by craigslist ads. The inspiration for his orchestral piece Gabriel’s Guide to the 48 States was Depression-era guidebooks.

Kahane’s latest large work is The Ambassador, which is both a Sony Masterworks album and a staged performance piece (with four additional songs) that premiered last fall. (t will also be performed February 27 and 28 at the Freud Playhouse at UCLA.) Each song carries the address of a specific location in Los Angeles, and each is inspired by both the location’s architecture and its residents.

Although Kahane was born in Venice Beach, California, he grew up in New York City and northern California and now lives in Brooklyn. So . . . why LA?

“I had wanted to do a piece about Los Angeles for a while, and it crystallized in the summer of 2012 when I was out there,” he explains.” I felt a wave of emotion related, I think, to the underbelly, the unsung pathos of the city, and I wanted to try to excavate that."

Inspiration came from cinema, literature, social commentary, and news events. The title tune is a lament voiced by the doorman of the Ambassador Hotel—infamous as the site of Robert Kennedy’s assassination—which was demolished in 2005. Other pieces draw on such films as Blade Runner and Die Hard as well as from the detective fiction of Raymond Chandler. The centerpiece is a nine-minute work written from the viewpoint of Latasha Harlins, a young girl who was killed in 1991 by a store clerk who mistook her for a thief.

Kahane collaborated with Tony Award–winning director John Tiffany and designer Christine Jones to stage the piece, which was commissioned by the Brooklyn Academy of Music (BAM) for its Next Wave Festival. After a tryout at the University of North Carolina, where Kahane has an academic residency, it had its BAM premiere at the Harvey Theater in December. Appropriately, it will also be performed at UCLA in February.

Kahane hopes The Ambassador will spark a better understanding of the complexity of Los Angeles, a city often characterized as shallow. “There are two LAs,” he says. “There’s the LA of film and TV and fiction, this kind of mythological LA, and then there’s this incredibly vulnerable physical city—the city that burns and has earthquakes and Santa Ana winds. And its architecture sits at the intersection, so using that as an organizing principle felt like a way to get inside the city.”