As an undergrad, David Adler ’14 went to India to study bureaucratic corruption and inefficiency. Kate Nussenbaum ’15 created an experiment on how preschoolers learn language from TV; she then submitted the results to an academic journal. Abi Kulshreshtha ’15 studied a topological insulator, a material that could one day be used to create quantum computers operating at much faster speeds than today’s machines. 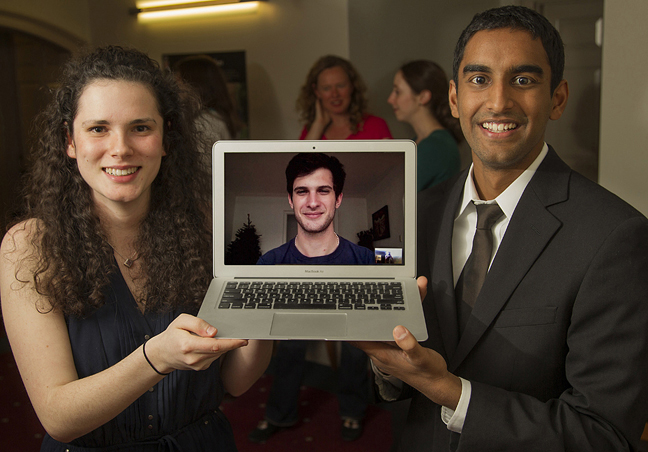 Mike Cohea
Rhodes Scholars Kate Nusselbaum '15, David Adler '14, and Abi Kulshreshtha '15.
Meet Brown’s 2015 Rhodes Scholars, recipients of the much-coveted and highly selective honor that allows young scholars to study for two or three years at Oxford. Brown has had more than two Rhodes in the same year only once before.

In addition to her scientific work, Nussenbaum worked at the Brown Daily Herald, where she rose to become a senior editor and a member of the editorial board. “Science and journalism are somewhat similar,” she says, “in that they are about asking important questions, figuring out the answers, and then communicating them to other people so that they can drive real world change.”

After his graduation last year, Adler went to Mexico on a Fulbright scholarship to study the government’s public housing policies and how that country’s poorest residents organize to make sure they get government services. “It’s about developing these complex relationships with the state and forcing politicians to pay attention to citizens’ demands,” he says.

Kulshreshtha, who grew up near Dallas in Grapevine, Texas, volunteered as a teacher at Providence’s Hope High School. He cotaught a class on civics there and then organized a regional model U.N. conference for high schoolers.

After noting that the participants in the U.N. program mainly come from wealthy private schools, he worked with the Providence school district to start a model U.N. program at Hope High so students there could participate. Teaching “kind of gives me a rush,” he says. At Oxford Kulshreshtha plans to study both public policy and theoretical physics, looking at ways science can improve education and government policy.