If there’s one thing that makes ecologist Tricia Wurtz ’82 worry, it’s Canadian thistle. A patch of this nasty weed was discovered in the remote northern Alaskan settlement of Stevens Village in 2011. And that’s not good. 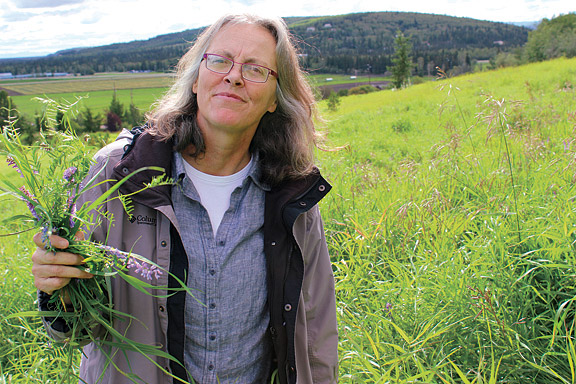 Courtesy Tricia Wurtz
Wurtz uproots invasive species of plants to protect Alaska's wilderness.
Wurtz, the director of the U.S. Forest Service’s Forest Health Protection group’s invasive plant program in Alaska, quickly realized that, unless the invasive thistle was wiped out immediately, it could spread far beyond the seventy-eight-person village. “It’s very easy to spread, and it’s so injurious,” Wurtz says. “It can reduce a crop yield to zero. You cannot really grow anything else in that field.”

Alaska boasts 128 million acres of forest, and Wurtz is in charge of keeping invasive plants from destroying it. Threats abound. “Alaska’s ecosystems are not pristine, but they’re pretty darn close,” says Wurtz. The spread of a single nonnative species can cause severe and lasting damage.

Take Elodea. It’s an aquatic plant commonly used in aquariums, but Wurtz says, “I think it’s the most serious invasive plant facing Alaska.” It grows quickly and is resilient enough to spread beneath ice during harsh winters. So far, it has taken root in eighteen Alaskan lakes and rivers, in some cases near lucrative salmon fisheries. Wurtz suspects that the problem started with people dumping unwanted aquariums into a natural body of water.

Eradicating Elodea has been tricky because the plant has popped up near drinking wells, making the use of an herbicide problematic. Wurtz is now exploring dredging affected rivers and lakes with equipment that acts like an underwater vacuum, though it’s expensive and slow.

Bird vetch is another mystifying nuisance, albeit an attractive one. Florists frequently tuck its purple flower into bouquets, but it’s spreading fast around Fairbanks. “It’s a pretty little roadside flower, but the infestations have grown so thick that no one likes it around here anymore,” Wurtz says. “For reasons we don’t understand, it grows very aggressively.”

Besides her field work, Wurtz oversees a federally funded program that distributes about half a million dollars annually to organizations studying and fighting floral threats to Alaska’s ecosystem. Ripping plant life from the ground by hand effectively controls some hazardous species, so Wurtz’s team organizes public weed-pulls to teach people about identifying invasive plants.

Wurtz has been with the U.S. Forest Service in Alaska for twenty-seven years. At Brown, her interest in flora sometimes made her stand out. She was the only student in her biochemistry class who didn’t plan to go to med school. “I always thought plants were beautiful, and different from animals in a cool way,” she says.

An Illinois native, she moved to Alaska for a summer job after graduation. A University of Alaska ecologist hired her to help with his field research there. “I was sure it was going to be my one summer in Alaska and that it would be a fun little thing,” she says. But she wound up staying.

Before focusing on invasive plants, she worked in the Forest Service’s research division. She studied topics like how the timber industry could sustainably log white spruce trees. One of her more unusual research projects was a 2005 study of how wildfires could turn Alaska’s forests into fertile grounds for growing delicious morel mushrooms.

“Morels grow really well where the forest burns. There can be enormous fruitings of morels, tons and tons that come up in a short period of time,” she says. “That was the most fun research I have ever done.”

Reader Responses to Stop Those Plants!