Forgive parents for being confused by talk of teacher accountability and student assessment, the “race to the top,” and Common Core. Reformers from legislators to philanthropists pledge to infuse rigor and relevance into classrooms. But sometimes it seems that the more schools are reformed, the less they engage students. Enter The Teacher Wars: A History of America's Most Embattled Profession by education writer Dana Goldstein ’06, who makes a convincing case that politicians are wrongly vilifying teachers by holding them accountable for problems that range from struggling families to the decline of good-paying blue-collar jobs. 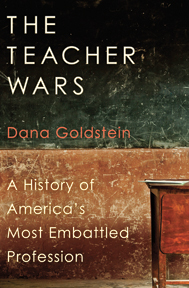 The Teacher Wars is a smart history of a profession that, in the past, has lured women and then shunned them, put its most experienced workers on pedestals and then toppled them. As Goldstein notes, U.S. education secretary Arne Duncan once said that effective teachers “walk on water,” even as he alienated them with an emphasis on metrics for effectiveness.

Goldstein shows that conflicting and even misleading messages about education reform have been around since the time of Horace Mann (who graduated from Brown in 1819). If you sense a lot of hand-wringing about the flaws of public education under a Democratic president these days, you might remember when President Reagan’s administration released A Nation at Risk in 1983, blaming lackluster teachers for “a rising tide of mediocrity.” For that matter, in the mid-1800s, feminist Catharine Beecher worried about poorly educated children and recruited volunteer teachers to go to frontier schools in what Goldstein sees as a forerunner of Teach for America.

Goldstein, who comes from a family of educators, has an approachable way of writing about a field that’s usually strewn with jargon. She discusses politicians who argue that “money doesn’t matter” in education: “Accountability reformers love to cite evidence that the United States spends more per student than many other nations, whose kids kick our kids’ butts on international tests.” Then she counters that notion, saying, “We are not paying teachers the upper-middle-class salary that would align with our sky-high expectations for their work.” Her epilogue is filled with common-sense remedies that go well beyond the Common Core.

I hope that school administrators make this book required reading for themselves. I once taught at a boarding school where I was encouraged to take my English class down to a riverbank while teaching about Huckleberry Finn’s journey on the Mississippi. My own children are in a public-school district that’s celebrated for high test scores. Holding class by a river? That wouldn’t happen at my kids’ Blue Ribbon school; it’s not on the state assessment test.