Sam Trammell ’91 has played his fair share of smooth talkers and nice guys, but he stretches his considerable likability to the limits in the gritty new indie thriller All Mistakes Buried. In the film, which was shot in just twelve days, Trammell portrays a crack-addicted hustler entangled in one crazy night of blood, sex, and thievery. “I don’t think I’ve ever done an alcoholic or a druggie before,” says Trammell, who also cowrote the story, “but I had a deep desire to play an addicted character and do it really intensely.” 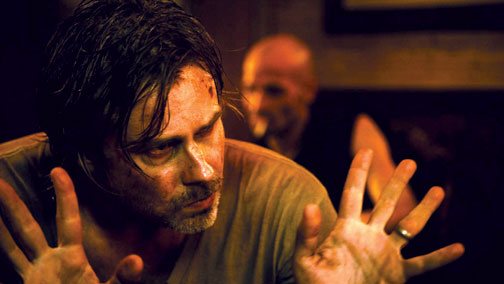 All Mistakes Buried, which opened in late January, represents a dark turn for an actor who never set foot on a stage until his senior year at Brown. By then, he’d “burned out” on his semiotics concentration, he recalls, and, at around the same time, Nick Nolte moved next door to Trammell’s home in Charleston, West Virginia. The two neighbors became golfing buddies. “Having proximity to a successful actor,” Trammell says, “that kind of stuck in my head.”

So Trammell was primed for action when classmate Peter Sallet ’91 urged him to audition for a New Plays Festival production of the Rebel Without a Cause parody Stupid Kids. “It was extraordinarily thrilling and fulfilling on so many levels,” says Trammell, who proved to be a natural in the role of a gay James Dean–type character. “You have to think, but you also have to get out of your head and get over your nerves to go in front of people. I just loved it.”

After graduation, Trammell moved to New York City and worked in regional and off-Broadway venues for eight years before earning a Tony nomination for his breakthrough performance as a passionate teenager in Lincoln Center’s revival of the Eugene O’Neill comedy Ah, Wilderness! The New York Times raved: “With his pouting good looks and slightly out-of-sync mannerisms, the actor embodies the two thrusts in young Richard’s charming assault on us: charisma and callowness.”

In 2008, Trammell landed the role of shape-shifting bar owner Sam Merlotte on HBO’s Emmy-nominated vampire drama True Blood. “One of the toughest parts about the show,” he says, “is that I had to be naked a lot, because when my character turned from being an animal into a human, I wouldn’t have any clothes on. There was a lot of dieting.”

By the time True Blood completed its final season in 2014, Trammell had started a family with actress Missy Yager in suburban Los Angeles, where they’re now raising four-year-old twins Gus and Winston. Upcoming projects for the actor include the white supremacist movie Imperium, which stars Daniel Radcliffe; the transgender drama About Ray, featuring Naomi Watts, Susan Sarandon, and Elle Fanning; and the John Travolta action thriller I Am Wrath.

“Recently I’ve been doing mostly movies, because they were the best things I read, and also it’s the stuff I was offered,” Trammell says. “As always, there are some things that don’t go your way, because no matter where you are in your career, it’s a fight. But I’m always looking for good material. You never know what’s going to pop up.”