You're Not Your Scars

At her February 29 talk, sponsored by the Brown Lecture Board, Davis wasn’t referring to playing the hero of The Help, or even the hero of How to Get Away With Murder. Instead, she told the packed Salomon Center audience what it means to be the first black actress to win a Primetime Emmy for Outstanding Lead Actress in a Drama Series, the second to win a Tony, and the first to be listed third on Time’s list of the 100 most influential people in the world. Most of all, though, she was talking about what it means to be one of the most prolific artists of color of her time. 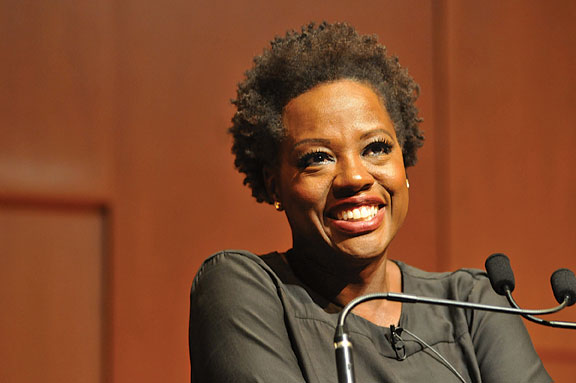 Frank Mullin
Viola Davis spoke of the poverty and racism she experienced in her childhood and her determination to give back: "Wherever there's a deficit, you gotta be an activist."

If, as the mythology scholar Joseph Campbell once noted, a hero is someone whose story starts off under very ordinary circumstances, Davis fits the bill.

“My ordinary circumstances,” she said, “were abject poverty.” She recalled growing up in Central Falls, Rhode Island, in condemned apartments with peeling paint, rats scratching through the night, and the shame of wearing socks without heels or toes. She remembered how every day after school, “in shoes two sizes too small,” she ran while boys, eight or nine of them, chased her, hurling threats and racial slurs and bricks. She would flip them all off, even as she was running for her life. “But you know,” she said, “you’re not your scars.”

Every hero needs a mentor, Davis said, “someone who knows the road and has weathered the storm.” Hers was her older sister, Diane, who had gone to segregated South Carolina schools where her teachers beat her for being too dark-skinned. Diane urged her little sister to light upon “the passion that catapults you out” from an abject world to an extraordinary one.

When Davis found acting, she said, “It was like falling in love, like—I don’t know—praying. I didn’t hear the rats.” She immersed herself in the craft, ultimately attending the Young People’s School for the Performing Arts in nearby West Warwick on a full scholarship. That was followed by Rhode Island College and then Juilliard. By that time, Davis said, “I had mastered the technique of drive.” She was coming into her own as an artist. 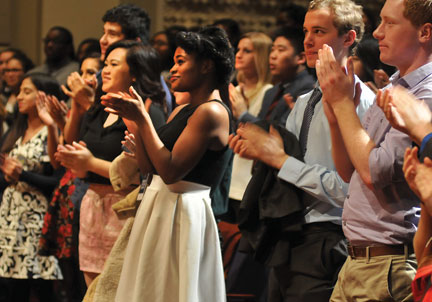 Frank Mullin
The packed crowd was moved to tears and laughter, giving Davis three standing ovations during her speech.

But despite this “outer shell of success,” she said she remained haunted by the trauma of growing up impoverished, abused, and ashamed. And so, even as she collected accolades, “I was still running, man,” she said, her voice breaking. “This is why I can tap into your pain. Because I know it.”

Coming to terms with these memories of Central Falls was her “hero’s ordeal,” she said. “Memories demand attention. Memories have teeth.”

Eventually, a therapist, who Davis believes was another of her mentors, helped her make sense of all that pain. “I realized that the biggest success I could find was internal,” she said. “Everyone measures you by your success, but they forget about that final step. Which is significance.”

In time, Davis and her husband, Julius, started JuVee Productions to give voice to marginalized artists, because as she put it, “If you aren’t living a life bigger than yourself, then you aren’t living at all.” It was her turn to become a mentor, sharing tales of hard-earned success.

Others may see a successful and pioneering actor, but Davis sees the fuller story. “I am not,” she says, “who you think I am.”

Reader Responses to You're Not Your Scars