Documentary cinematographer and director Kirsten Johnson ’87 is having herself a year. After her newest film, Cameraperson, debuted to an adoring audience at Sundance in January, April’s Full Frame Documentary Film Festival in Durham, North Carolina, showcased an extensive tribute to her distinguished twenty-five year career. Now the prestigious film distribution company Janus Films/Criterion has slated Cameraperson for theatrical release in September. 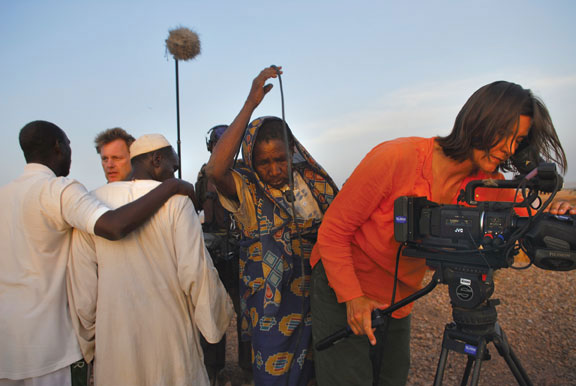 Much of Johnson’s work chronicles the deep suffering of humanity worldwide. Cameraperson, which she directed, is a montage of scenes from her earlier work—films about Sudanese refugees and Bosnian war survivors, Nigerian maternity wards and midwestern thunderstorms—and personal footage of her family life, including her mother’s losing battle with Alzheimer’s. A raw format—gasps of delight, questions from behind the camera—lets her presence be known. The initial impression is jumpy and disconnected. But as the images progress, motifs emerge. As we take in the sensibilities and sensitivities of Johnson’s eye, the film becomes a visual memoir, a meditation on her life behind the lens.

“I think I was fragmented—I left my heart in many places,” Johnson says. “I didn’t acknowledge that it’s demanding something to take in that much, and I think this is a point of bringing it all back together.”

Johnson’s work with acclaimed documentary filmmaker Laura Poitras is perhaps her best known: She shot The Oath, which follows the ex-bodyguard of Osama Bin Laden through Yemen during his brother-in-law’s trial in Guantanamo, and she worked with Poitras on Citizenfour, 2014’s Oscar-winning documentary about Edward Snowden and mass surveillance. Her tribute at Full Frame included a film on the French philosopher Jacques Derrida; Deadline, chronicling the commutation hearings of death-row inmates in Illinois by an outgoing governor; and a new short film, The Above, about a surveillance blimp watching Kabul, Afghanistan.

It’s not surprising to hear her credit her exposure to international relations at Brown with widening her horizons. Johnson grew up a Seventh Day Adventist in Wyoming before attending Brown and learning to appreciate how many ways there are to narrate the world. She studied with Africana Studies professor Anani Dzidzienyo, and was inspired to apply for a Watson fellowship focusing on filmmakers of the African Diaspora. When she didn’t get the fellowship, Johnson says, Dzidzienyo “really encouraged me to go to West Africa anyway.” She ended up in Senegal, where she supported herself by working on film crews. She left after two years to attend La Fémis, the French National Film School, as a cinematographer.

Revisiting her artistic history in Cameraperson was a traumatic experience for Johnson, so much so that she was forced more than once to step away from the project for a time to let it breathe. Ultimately, Cameraperson served as catharsis.

“I had this need to figure out what’s been happening to me all this time,” Johnson says, “to cope with this sense of loss.”