Benedict Arnold. Few names in American history conjure up similar levels of opprobrium. But in his new book, Valiant Ambition, Nathaniel Philbrick ’78 argues that we should have a greater appreciation for this treasonous American general. One of the book’s central contentions is that it was Arnold’s dastardly betrayal of George Washington and, indeed, the entire revolutionary cause, that motivated a languishing American populace in 1780 to reignite a fading patriotism, muster the troops, and pursue the British to a critical defeat at Yorktown a year later. 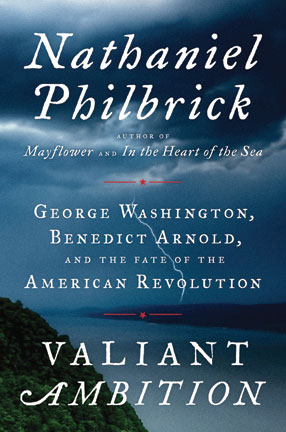 This study of the murky middle years of the Revolutionary War opens with the British taking of New York in 1776 and ends in 1780, well before American victory was assured. Philbrick first sets up Arnold’s wartime successes, which included taking Fort Ticonderoga early in the war, leading the (ultimately failed) charge to Quebec City, turning back the British on Lake Champlain, pursuing British soldiers after their pillaging of patriot supplies at Danbury (Connecticut), and aiding General Horatio Gates in the Battle of Saratoga. Before Arnold became a traitor, he was an exemplary wartime general—and a favorite of George Washington.

The book’s second half details Arnold’s slow slide into treason. Why did Arnold betray his country? Philbrick rightfully paints the circumstances as complicated and multiple: the repeated slights and insults from Congress regarding the promotion and honor Arnold felt he deserved; the disrespect Arnold perceived from his fellow officers (especially General Gates); Arnold’s marriage to Peggy Shippen (who may have first planted the notion of defection in Arnold’s mind); a debilitating injury in his leg from a musket ball; the public humiliation of a court martial; Arnold’s increasing belief that the Americans were not going to win the war; and, perhaps most fatally, Arnold’s expensive lifestyle. Philbrick argues that Arnold’s final turn towards the British—and the plan to hand George Washington and Fort West Point on the Hudson to them on a silver platter—was motivated “first and foremost” by money.

Early American historians will likely find little that is new in Valiant Ambition. There are two recent (and more comprehensive) biographies of Arnold already in print. And Philbrick’s argument that Arnold’s defection was the critical component that galvanized flagging American patriotism seems slightly overstated. Americans did react strongly, widely, and even violently to Arnold’s betrayal, but other authors have pointed to multiple additional factors that reignited the war effort. And although Philbrick successfully humanizes some actors in this familiar drama and pulls in some “everyday” characters, in other ways he completely reifies older notions, virtually omitting the importance of Native American and African American involvement in the war.

Nonetheless, Philbrick has managed to narrate this portion of the American Revolution in a fresh and engaging way—military battles and all—and to provide a nice international context for the war, demonstrating that it became a war of global significance after the French became involved. Philbrick rightly creates a war full of contingency, surprises, and alternate possibilities. Heroes do not always act as such, outcomes are never certain, and victory is seldom assured. It is the very real uncertainty of it all that will surprise and enthrall a general readership.

Linford D. Fisher is an associate professor of history at Brown.
What do you think?
See what other readers are saying about this article and add your voice.