A Revolution in Stroke Care

Stroke remains the fifth leading cause of death in the United States—it ranks second globally and first in China—but Karen Furie ’87, ’90 MD, neurology chair at Brown’s Alpert Medical School, says there may be hope for prevention and treatment. 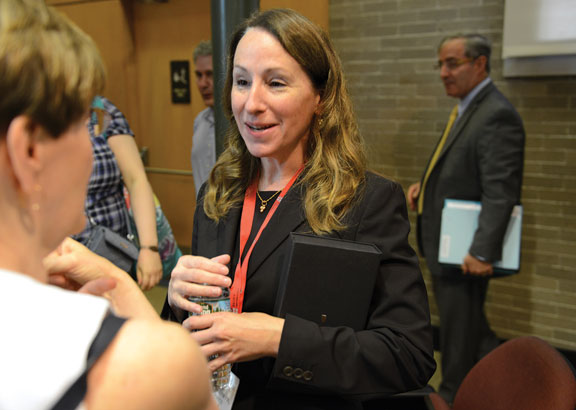 Furie helped lead something called the Insulin Resistance Intervention after Stroke Trial (IRIS), which  looked at 3,876 patients who had suffered a stroke despite excellent medical care and blood pressure and cholesterol that were under control. Noting an association between strokes and insulin resistance, the researchers treated patients with pioglitazone, an FDA-approved glucose-lowering agent that reduces the risk of a wide range of cardiovascular events, including strokes. For every 100 patients treated with the drug in the trial, three strokes were prevented compared to the control group.

One reason pioglitazone has not been used earlier in stroke prevention is its known side effect: it increases the risk of bone fractures, which can be a problem especially for older patients—who are the ones most likely to suffer strokes.

“How do you treat insulin resistance?” Furie asked during her lecture. “You tell patients to lose weight, eat right, and exercise.” The audience chuckled, knowing that such advice is rarely followed for very long. Treatment with pioglitazone could be another option.

So what do you do when someone near you has a stroke? Get help as fast as possible, Furie urged. For every minute without treatment after a stroke, an estimated 1.9 million neurons are lost—“the equivalent,” she noted, “of three weeks of brain aging.”

One difficulty with treatment is determining the type of stroke the patient has suffered. The early administration of clot-busting drugs can save a patient’s life with an ischemic stroke, which results from a clot lodged in a blood vessel to the brain, while the same drugs can have a deadly effect when used to treat a hemorrhagic stroke, which is caused by bleeding in the brain.

Furie said that many people wait too long to call 911 when someone is having a stroke. More emergency vehicles, she pointed out, are now equipped with a mobile CAT scanner that can allow the EMTs to determine which type of stroke they are facing and begin the appropriate treatment more quickly.

Reader Responses to A Revolution in Stroke Care