After the Latin Night massacre at the Orlando LGBT nightclub Pulse on June 12,  some victims’ families discovered their loved ones’ sexual orientations for the first time. Twenty-eight years earlier, Anna Gonzalez ’91 wrote about her own struggle for family acceptance in “Latino y Lesbiana: Why Must I Choose?” 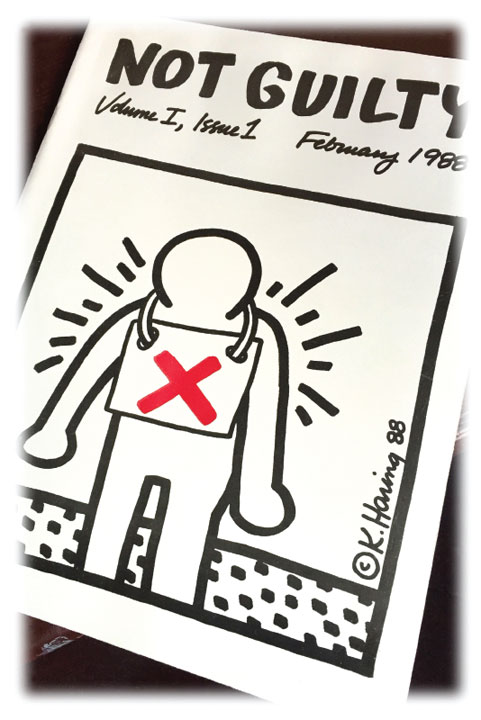 The article appeared in Not Guilty, a sixty-page primer on gay, lesbian, and bisexual issues published by students in February 1988. Gonzalez, who had the initial idea, raised the money; I became editor-in-chief. The magazine included a pink triangle pin in each of the 6,000 copies and featured an original cover illustration by graffiti artist Keith Haring.

We created Not Guilty after attending the October 1987 March on Washington for Lesbian and Gay Rights—one of whose organizers was the late Stephen Gendin ’89—and returning to campus inspired and angry. Rebecca Hensler ’91 remembers countless students wearing the triangle pins, at a time when Brown still refused to add “sexual orientation” to its nondiscrimination statement. “Not Guilty normalized supporting the lesbian and gay community at Brown,” Hensler says.

Not Guilty became an arts journal the next year, then ceased publication. The original 1988 issue was reprinted in 1989 to help train resident counselors. Photo by Frank Mullin

Reader Responses to Before Orlando