The drums of Mali ushered students into the First Baptist Church on North Main Street on Saturday, May 28, for the baccalaureate service, and, once the service was over, a traditional Chinese Lion Dance ushered them out. In keeping with the baccalaureate’s spiritual roots, prayers, songs, dance, and pageantry paid tribute to a variety of religious traditions, including Buddhist, Jewish, Sikh, Native American, traditional African, and Christian, before the speaker, Kevin Gover, began his address. 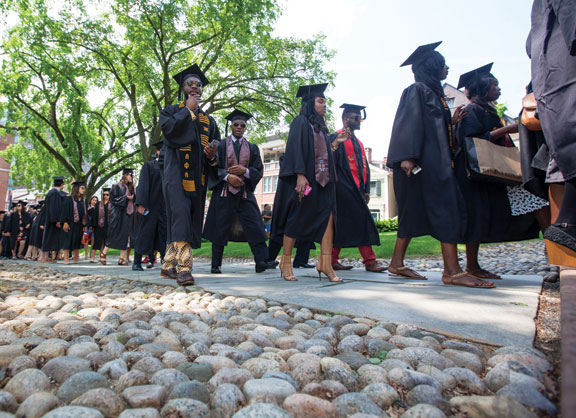 The baccalaureate procession made its way from campus to the steps of the First Baptist Church.

The service started with the Muslim call to prayer melodiously delivered by Adnan Adrian Wood-Smith, associate chaplain for the Muslim community. The peaceful refrain of “Allahu Akbar”—God is Great—echoed through the 241-year-old church and across the College Green, where families and alumni could listen and watch on two Jumbotrons. This was followed by a recitation of Ecclesiastes 3:1, a verse that entered pop culture in 1965 when The Byrds’ cover of Pete Seeger’s “Turn, Turn, Turn” hit number one on Billboard’s Hot 100 chart. The juxtaposition of the two iconic passages set the tone for a service that was as diverse and inclusive as Brown aspires to be.

The talk by Gover, director of the Smithsonian Institution’s National Museum of the American Indian and a citizen of the Pawnee Nation of Oklahoma, was called “Choosing Our Histories.” In it he pointed out that the telling of history is often an incomplete and unfair process. “You and your contemporaries will literally decide what our history is,” he told students. “Remaking history is an ongoing process, and every generation does it.”

Gover spoke about the version of American history he learned as a child in public school in the 1960s and the effect it had on him as a Native American. “Like all of you, I knew I was a smart kid,” he said, “but the Indians I was learning about in school seemed dumb, primitive. The racial messages that I took from my schooling were so powerful. I knew I was an Indian, but I literally wondered whether the reason I was smart was that my mother was white.

In his address, Gover urged the Class of 2016 to help “make an American history that is introspective, inclusive, and rigorously honest.” Yet he urged them to avoid simple constructs. “It is not about heroes and villains,” he said. “And we should not seek to erase those of whom we disapprove. We can find something to dislike in all of our noteworthy historical figures, but we should not let our dislikes blind us to their merits.”

Gover ended by speaking of the importance of humility—“I remember being wrong once,” he joked—then encouraged the seniors to “go change the world!”