When news of Donald Trump’s victory reached campus in the wee hours of November 9, the Brown Daily Herald reported that students could be seen in tears as they walked along College Hill streets and returned to their dorms after election-viewing parties. Students were upset and even frightened, given the president-elect’s campaign vows that, if enacted, could negatively affect the rights of non-American Muslims, undocumented Mexicans, and black and LGBTQ people, all represented at Brown. The Brown Center for Students of Color stopped all programming the day after the election and held a “Community Care” event for students of color and from other marginalized communities, according to Black Student Initiative Coordinator Taylor Michael ’17. 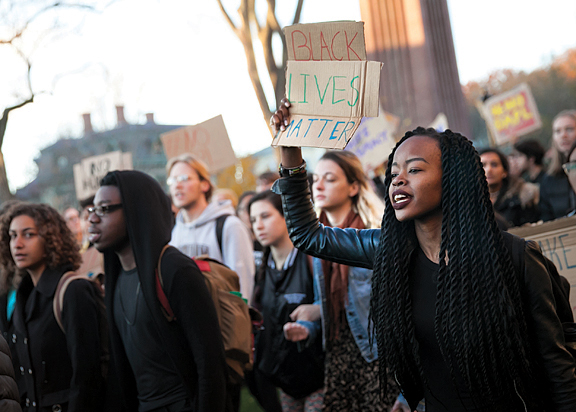 A walkout protested the racism and homophobia that students felt had led to Trump's victory.

The dismay was also no surprise since 85 percent of Brown students had told a BDH pre-election poll that they’d vote for Hillary Clinton. But there may have been some smiles, as well. Last February, the website The Tab conducted a Q&A with Joe Capani ’18, calling him, with click-bait silliness, “the only Trump supporter in the Ivy League.” In reality, about a third of Brown College Republicans said they’d support Trump, even if they had to hold their noses to do so.

Others couldn’t. On October 19, the College Republicans’ campus leadership published a non-endorsement in the BDH that listed many reasons why the club, as a whole, could not support the party’s candidate, citing his “outright racist comments,” sexual-assault brags, and more. “As an ethnically and socioeconomically diverse group of individuals,” they wrote, “we are deeply disturbed by Trump’s continued appeasement of the alt right.” President Christina Paxson appeared to echo that sentiment in an e-mail sent out the day after the election: “The tone, tenor and rhetoric of this election ran counter to our values as a community,”she wrote.

In the weeks after the election, faculty, students, and alumni engaged in support groups, staged protests, and signed petitions aimed in particular at Trump’s anti-immigration and anti-Muslim policies. Teach-ins analyzed the election results, and faculty made educated guesses about what the next four years might bring.

But the most notorious post-election incident occurred on November 10, the day before Veteran’s Day. As it does every year, the Office of Student Veterans and Commissioning Programs planned a ceremony for campus veterans, and before it volunteers lined the College Green with small flags, as they do every year.

One of the veterans who’d planted the flags soon heard from fellow veteran Jonathan Hagedorn ’19, a former U.S. Marine combat engineer in Afghanistan, that some students passing by had started pulling out the flags, breaking the sticks on which they were mounted and tossing both flags and sticks onto the ground.

Although the incident played across conservative cable stations as Brown students trashing veterans, Hagedorn says the truth is more complicated. “The majority of students thought the flags had to do with the election,” he explains. “It was just bad timing. There’s only twelve undergraduate veterans. Not a lot of people had any idea there were any veterans around, much less what day is Veteran’s Day.” When the veterans explained why the flags were there, Hagedorn says, most of the flag-vandalizers apologized: “A lot of people immediately expressed remorse.”

Still, Hagedorn, who helped replant the flags into the ground and who briefly joined a sit-in to protect them, said the entire incident only emphasized the isolation of military veterans at Brown. He was saddened that his fellow students didn’t even know it was Veteran’s Day. Desecration of the flag, a symbol of hope, of “all the ideals our country strives for,” and of what he and other veterans have risked their lives for, was demoralizing, especially given the timing. “It’s like getting dumped on your birthday,” he says. But Hagedorn says he understands the anger of those who perceived them as Trump flags, adding that in recent years, “being patriotic has been stolen by racists and assholes.” 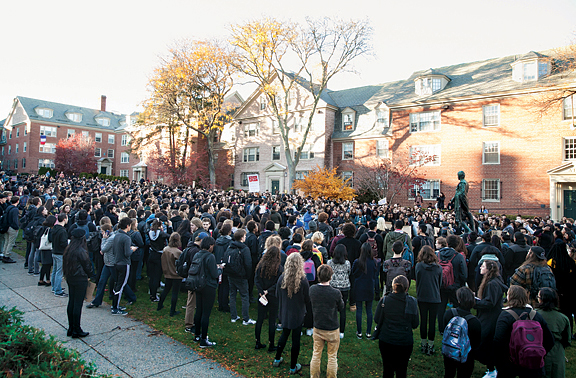 Danielle Perelman
More than 400 people assembled to support marginalized groups.
President Paxson responded to the incident by saying she was “appalled.” In a November 16 statement, she wrote that “these acts of vandalism are a violation of Brown’s Code of Student Conduct, and students found responsible for code violations are subject to sanctions.” The incident also prompted a protest, apparently by non-students, in which about a dozen vehicles drove through campus, waving American and “Don’t Tread On Me” flags. One witness claimed to have heard a car horn playing “Dixie.”

More representative of student sentiment was a November 16 student walkout, organized as part of the national #OurCampus movement. Students marched from Wriston Quad to the Front Green, “to protect [Brown] students, particularly black, Native and indigenous, Asian, undocumented, Muslim, Latinx, and LGBTQ+ students.” Organizers insisted there be no anti-Trump or pro-Hillary rhetoric, explaining that the movement was larger than the election, which they saw as a symptom of the prejudices and inequities still present in the country. More than 400 students, faculty, and staff members participated. The group presented a list of demands that included stronger support for marginalized groups on campus.

Also right after the election, petitions began to circulate from alumni, students, and faculty, asking the University to declare itself a sanctuary for undocumented immigrants. In a November 16 BDH op-ed, the administration responded: “Based on consultation with legal counsel,” Paxson wrote, “we have come to understand that private universities and colleges do not have such protection to offer legal sanctuary from members of law enforcement or Immigration and Customs Enforcement. While we wish we could offer absolute protection to members of our community who are threatened by possible changes in policy, it would be irresponsible to promise protections that we cannot legally deliver.” (A number of private colleges have declared themselves “sanctuary campuses,” but they cannot not actually promise legal sanctuary.

The op-ed, signed by Paxson and Provost Richard Locke, described the increased support the University now offers undocumented students, including financial aid and on-campus support services. “We are bringing legal experts to campus to advise students, faculty members and staff members of their rights, responsibilities and potential options,” Paxson and Locke pledged, adding that the school would provide even more logistical and financial support, if needed.

The Paxson administration has also said it will not give information to immigration officials without a warrant. In late November, President Paxson, along with more than 250 college and university presidents (the number was almost 600 by the end of 2016), signed a statement calling for the Deferred Action for Childhood Arrivals (DACA) program, which protects undocumented students from deportation, to be “upheld, continued and expanded.”

Reader Responses to After the Voting