The summer before his senior year at Brown, Richard Flores ’17 had what he calls a “wake-up call.” The literary arts and psychology concentrator had landed an informational interview at Nickelodeon. Interested in applying for jobs in the entertainment industry after graduation, he asked the rep what the likelihood of getting one was. She was blunt: pretty slim. 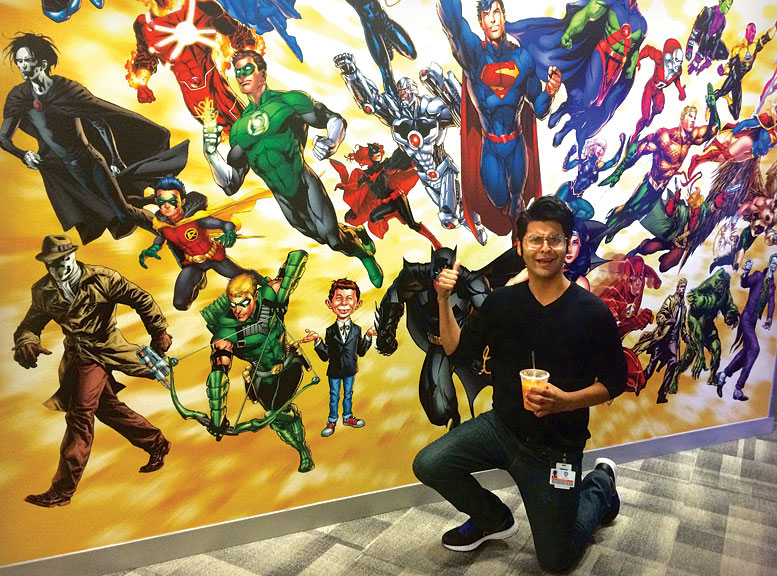 That’s when Flores decided it was time to beef up his résumé. Though he was involved in multiple extracurricular activities at Brown—not to mention working two campus jobs and embarking on an ambitious thesis project, a film about a refugee turned superhero—he hadn’t yet interned in the entertainment business.

So Flores applied for internships, eventually landing one at MTV and another at director Justin Lin’s production company, Perfect Storm. The catch? He’d have to move back to Los Angeles, his hometown, take a semester off, and graduate the following year.

Flores approached his faculty mentor and the supervisors at his two on-campus jobs for advice. “They said, ‘You can’t say no to this opportunity,’ which I really appreciated,” Flores recalls. So he headed to L.A., gaining experience that led to another job the following summer—a “dream internship” with DC Comics. In December, Flores was one of 111 “.5ers” to graduate from Brown (for simplicity, the BAM rounds their class years up); about sixty of them took part in a Midyear Completion Ceremony in Sayles Hall on December 3.

Students’ reasons for graduating in December vary widely. Some, like Flores, take time off to intern, volunteer, or work. Others travel or pursue creative projects, or they may face academic, personal, or medical issues. Transfer students such as Anton Manzano, an anthropology concentrator who spent his first year of college at a university in Spain, may need an additional semester to meet credit requirements.

Though he grew up in the Philippines and attended a Spanish university, Manzano said that what has set his Brown experience apart is his exposure to international diversity. “I have always been interested in international issues,” Manzano says. “But I have never known as much about what is going on in the world around me as I do since coming to Brown. Being here has exposed me to people who have come from all over the globe, and I am always learning from their diverse perspectives.” Although Manzano has chosen to walk in the Commencement exercises in the spring, he said that the Midyear Completion Ceremony is an important rite of passage for seniors who finish their Brown career in December.

“It would feel different if we had to wait five more months to march,” he says. “This feels more rewarding. It’s nice to know we are being recognized for our achievements despite our different academic position. Also, there are other .5ers who won’t be able to attend in May, so this gives a sense of closure. It’s a way of saying goodbye.”

Like the College ceremony at Commencement, the midyear event last year included two senior orators: Flores and Sophia Bonenfant, of Taunton, Massachusetts, a biology concentrator who served as a residential peer leader for three years and was a teaching assistant for an introduction to biology course. She also interned for the Childhood Asthma Research Program at Hasbro Children’s Hospital in Providence and hopes to eventually become a pediatrician. The Midyear Completion Ceremony, she said, offers recognition for those who take a more nontraditional path toward their degree, a path that sometimes comes with challenges.

“We spend a lot of time formulating plans for how our four years at Brown will go—for how our whole lives will go—but I’ve learned that things don’t always go according to plan,” Bonenfant said while preparing her remarks for the ceremony. “I didn’t expect to take a leave from Brown, but it happened.” She said her talk would address “how these changes in plan are not failures on our part. It’s how we navigate these obstacles and rise above our challenges that defines who we are.”

Flores said he would focus on an important realization he had while interning at DC Comics, where part of his job involved developing potential new storylines for the comic book character the Blue Beetle. The Blue Beetle’s alter ego is Jaime Reyes, who, like Flores, is Latino. Very little of the Blue Beetle’s story has focused on his cultural identity, Flores said, and during his internship he worked on ways to integrate that heritage into the character’s story arc.

“Kind of like the Blue Beetle, the closer I got to my goals at Brown,” he said, “the more I forgot who I was culturally—until I had this great opportunity to take a leave and go back to L.A. for these internships. It can be easy to be trapped in this ivory tower, to be granted these superhuman abilities and forget who you are and where you come from. In the storyline I worked on, Reyes gained newfound strength after accepting the fact that he is not just a superhero but a Latino superhero.” It is important “to accept every facet of who we are.”