For Cheryl Miller Houser ’83, making a documentary about the entrepreneurial dreams of a group of millennials was a particularly personal challenge. “I drew inspiration from them,” says Houser, a longtime film and television producer who founded her own multiplatform production company, Creative Breed, in 2013. “I really identified so strongly with what they were going through.”

Generation Startup focuses on six budding entrepreneurs from Venture for America (VFA), a nonprofit that places recent college graduates in start-ups for two years then helps them launch their own businesses. Working long hours, often under great stress, they pioneer such ideas as chickpea pasta, a website that pairs women in technology with mentors, and a high-tech property management company. 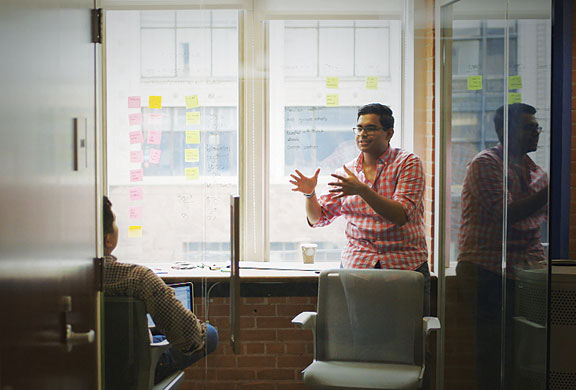 In the documentary Labib Rahman discusses strategy for Mason, which builds smart phones and tablets.

“I’ve witnessed in scores of screenings around the country that what resonates most with viewers is the emotional journey of our subjects,” says Houser, who codirected and coproduced the film.

VFA has fellows in seventeen U.S. cities, but the film’s protagonists—including an African American female engineering graduate of MIT and a son of Bangladeshi immigrants—all work in Detroit. The city’s renaissance is captured in shots of bustling markets and panoramic streetscapes. “Visually it’s a very rich, very beautiful city,” as well as a showcase for “grit and determination,” says Houser, who, in concert with Academy Award–winning documentarian Cynthia Wade, followed her characters for seventeen months.

Houser’s executive producers on Generation Startup are Lauren Zalaznick ’84, a Brown trustee, and Susan Margolin ’85. VFA’s founder and CEO is Andrew Yang ’96, whom Houser met at a 2014 alumni breakfast organized by Zalaznick. At Brown, where she met her husband, Victor Houser ’81, Houser majored in comparative literature and remembers fondly a class with Edward Ahearn in which students were required to apply a different literary theory to James Joyce’s Ulysses every week.

After graduation, Houser says, she wanted to “marry the creative process that I loved in literature and storytelling with business.” She worked on David O. Russell’s debut film, Spanking the Monkey, and produced the Academy Award–nominated Children of Darkness about children with mental illness. At Creative Breed, she created Mad Genius Tips, a web series for Food & Wine that was nominated for a James Beard Award.

Houser chose the VFA stories because “it took me three decades to get up the courage to launch my own company.… And here were kids jumping into the void, figuring it out every day.” One surprise was how quickly her subjects seemed to mature, perhaps, she says, “because they were in such extreme circumstances.” That process became not just a theme of the film, but a mantra for Houser herself. “When we move outside our comfort zone,” she says, “that’s when we grow and change.”