Jon Turk ’67 has forayed into the heart of some of the earth’s most spectacular and dangerous wild lands—and, despite a few close calls, at age 70 he’s not planning on stopping anytime soon. 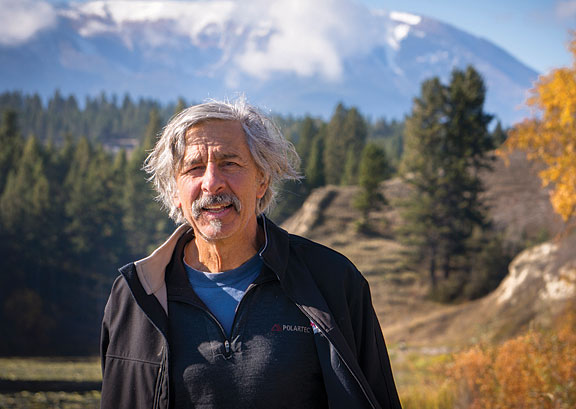 So how does an Ivy League grad become a twentieth-century adventurer? The son of a college chemistry professor, Turk grew up living the conventional suburban life in Connecticut (which may be enough to send anyone in search of adventure). “We weren’t an adventuring family at all,” he says. After Turk graduated from Brown with a degree in chemistry, he went on to earn a PhD in 1971 at the University of Colorado, fulfilling his parents’ wishes that he become a scientist or a doctor.

But the mountains outside Boulder kept distracting him. He couldn’t shake childhood memories of long hours exploring and foraging in the woods. One day, he got down on all fours with his dog to smell the spring earth, newly exposed after the snow had melted. “At that moment,” he recalls, “I knew I couldn’t spend the rest of my life in a chemistry lab.”

A newly minted PhD, he jumped with a buddy into his 1964 Ford Fairlane and drove, with a canoe tied to the roof, to the huge and remote Mackenzie River, which runs through the Yukon and Northwest Territories of Canada. The two men floated down the river for 800 miles before taking an old gold miners’ route over the Rockies.

The trip redirected Turk’s ambition to live the expeditionary life. That same year, 1971, he and his father, Amos, published Environmental Science, which he says was the first textbook on the subject and which led to a steady output over the next three decades of books on the environment and geophysics.

Income from textbook sales supported his second career as an adventurer. Over the decades, he’s kayaked across the North Pacific and around Cape Horn, mountain-biked through the Gobi Desert, and made first climbing ascents of “big walls” on Canada’s Baffin Island and first ski descents in the Tien Shan Mountains of the Kyrgyz Republic in Central Asia.

His crowning achievement, he says, was the 2012 circumnavigation, with fellow adventurer Erik Boomer, of the arctic Ellesmere Island, located in the Canadian territory of Nunavut. National Geographic called the circumnavigation of Ellesmere “the last great unattempted polar expedition.” Turk describes this adventure in his new memoir, Crocodiles and Ice.

He and Boomer spent 104 days on skis, on foot, and in a kayak, not only dealing with the challenges of climate and fatigue, but also trying to avoid polar bears. One night, he recalls, a polar bear ripped a hole in their tent and stuck its head in. The two men began yelling at the bear, but, Turk says, it wasn’t until those yells turned profane—ending with “your mother”—that the big white interloper seemingly got the message and backed out.

“At what point are you actually communicating with the bear,” Turk asks, “and at what point is it luck or randomness?” On the same trip, he adds, a wolf hung out peacefully alongside him and Boomer for fifteen hours. Over the decades he has learned to survive in extreme environments, catching and grilling his own fish and living for weeks off pasta, beans, and nuts. “There’s always a moment in the trip,” he admits, “when you dream about a Reuben on rye and a salad.”

Turk, who lives outside Darby, Montana, with his second wife, Nina MacLean, a retired lookout for the U.S. Forest Service, has also managed to raise two daughters, one a veterinarian and the other an organic farmer. His first wife, Chris Seashore, to whom he was married for twenty-five years, died in an avalanche in 2005 while they were both skiing in the eastern Sierras.

He has flirted with his own demise all his life. “I pushed myself so hard at 65 for Ellesmere that my metabolism shut down and I had to be medevacked near death to Ottawa,” he recalls. But that didn’t stop him from biking across the Tibetan plateau to visit the Dalai Lama’s birthplace, also in 2012, and he plans to do a similar cycling odyssey soon.

Despite the tragic death of his first wife, he and MacLean still embark on high-risk skiing trips. Why? After a long pause, he says, “I can’t really answer that question. It’s just a meditation at the greatest level. And I can’t stop.”

Reader Responses to The Adventurer