When I applied to college back in 1968, I would not have had a prayer of getting into Brown. But this past fall I made it through the Van Wickle Gates as a visiting professor in the English department. I’d had some thirty years of classroom experience at a broad array of institutions, including Johns Hopkins, The Chinese Academy of Social Sciences, the University of Haifa (Israel), and Georgetown. But my class at Brown had a character all its own. 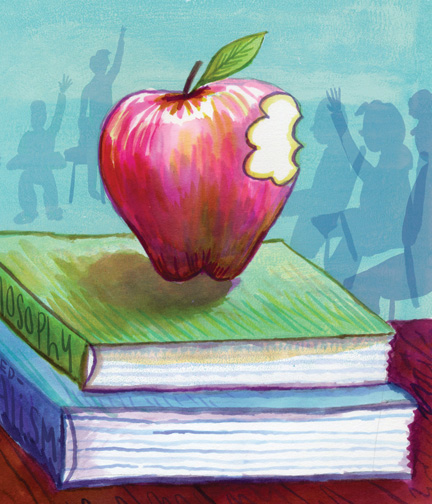 My course was advanced journalistic nonfiction. Each Tuesday, I would take the forty-three-minute Amtrak ride from Boston’s South Station to Providence and hoof it up the hill to Sayles, where I encountered a group of students like none I’d taught before. As a journalist and educator I am constantly hearing about the importance of critical thinking, but I haven’t seen it much in practice. At Brown, my students could not have cared less if their conclusions and mine were consistent or even compatible. Time and again on matters of literary quality, social and historical context, and even my pedagogical style, I was called upon to defend my positions.

For example, when I mentioned that journalists routinely remove the names of rape victims and wondered aloud whether such treatment inadvertently added to the stigma, a number of students challenged my assumptions about rape victims. This opened up a whole new debate involving victim’s rights, feminism, free speech, and the role of the press.

Another time, my students insisted I explain and defend my opposition to “trigger warnings”— I argued they come at the expense of free speech—or “safe spaces”—in any true democracy, I would say, all spaces must be made to be safe. The students were relentless in prosecuting their arguments, and, while never resorting to ad hominem attacks, made no allowance for my age, position, or title. I would win or lose based solely on the merit of my stand and the clarity of my argument.

As for the students, their points were usually substantive and informed. When I brought up the political philosopher J.S. Mill in one class, a student cited Mill’s view on dissent. I was often intellectually held to account—as it should be in a classroom. (And yes, there was a time or two when I would have welcomed a “safe space” for me as a faculty member.) Contrary to some external assumptions about Brown students, these confrontations were always civil, and, when rational debate had run its course, we moved on. Once, after class, I told a student I was sorry if I had been too zealous in my debate. She found my concern for her as amusing as it was unnecessary.

President Christina Paxson has spoken of the virtues of “constructive irreverence.” I am here to report that the message has apparently taken root. A little intellectual insurrection is a good thing. Particularly in our fragmented society plagued by cant and partisan rhetoric, independent minds like these may provide much-needed common ground. Thanks to my experience teaching at Brown, when I returned to my teaching duties at my home institution I invited those students to be “less obedient.”

My journalism course coincided with the election, and it will come as no surprise that most of the students were distressed by the outcome and worried for the future of feminism, diversity, free speech, climate change, immigration, and globalism, topics that invariably arise in a journalism course. And, yes, I was as upset as they were. But a few weeks after the election—and thanks largely to these students—I left Brown with a very good feeling not only about the University but about the prospects for preserving this democracy.

Ted Gup is a former staff writer for the Washington Post and Time. His most recent book is A Secret Gift.