Are Uber drivers “transportation entrepreneurs,” as the company claims? Patrick McQuown, an adjunct lecturer in the School of Engineering, and Professor Emeritus of Engineering Barrett Hazeltine, who coteaches an entrepreneurship class with McQuown, decided to find out. 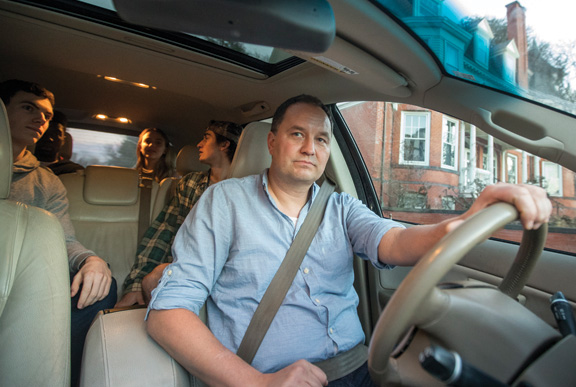 Nick Dentamaro
Driving for Uber does not offer the usual benefits of entrepreneurship, a student study found.

“I said to Barrett, ‘Why don’t I take the summer break, become an Uber driver, and make a case study out of it?’” McQuown recalls. He logged about 400 hours and 8,000 miles as a driver, documenting his experience along the way.

When the fall semester started last year, McQuown and Hazeltine asked their students to help broaden the study. Eighty-nine volunteered to split into teams and interview more than 100 Uber drivers. Their conclusion? Uber might not be as entrepreneurial as the company claims.

Most entrepreneurs succeed by attracting more satisfied customers than the competition. Buyers on eBay or Etsy, for example, look for top-rated sellers. But despite Uber’s customer-rating system for drivers—after every trip, riders can rate drivers on a scale from one to five—customers can’t choose drivers based on high ratings, McQuown points out. This means higher-rated drivers don’t get any additional business.

“Entrepreneurship means that you create a product or service that’s unique in the marketplace, and you’re rewarded with more profit,” McQuown says. “You simply can’t do that as an Uber driver. There’s no real chance to differentiate yourself from other Uber drivers.”

Uber also promises drivers the opportunity to make their own hours, but that doesn’t quite ring true either. When drivers accept a ride, they don’t know where their riders are going. A driver could be ready to call it a day when the call comes for a three- or four-hour trip. Turning the rider down risks a poor rating, McQuown explains, which could lead to being kicked off the app: “It negates this whole idea of being your own boss and setting your own hours.”

All told, McQuown found his experience with Uber to be not terribly flexible or profitable. McQuown says he made $9.23 per hour after expenses, thirty-seven cents less than the minimum wage in Connecticut, where he did much of his driving. Interviews with other drivers suggested they earned similar hourly rates.

“The negative elements of being an entrepreneur are present,” concludes study participant Constantin Wedekind ’18, referring to the requirement that drivers set their budgets and pay for upkeep on their cars. “But none of the benefits are there.”