You never know what you might find when you open a random box moldering in the stacks of the John Hay Library. This painting of a drummer by well-known Kiowa artist Stephen Mopope is one of seven of his works that were discovered, coated in dust and grime, by a staffer who was sorting through the print collection. Mopope was the most prolific of a group of traditional Native American artists called the Kiowa Five. 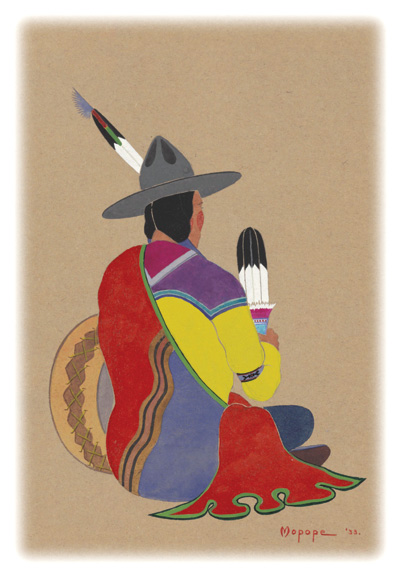 In 1926, they participated in a special art program at the University of Oklahoma. Two years later, the artists made their international debut in Prague, and their exhibition at the Venice Biennial in 1932 was the most popular exhibit there, according to author and art teacher Dorothy Dunn.

Mopope, a grandson of the Kiowa warrior Appiatan, was an accomplished dancer and flute player as well. One of his many commissioned paintings is a six-by-sixty-foot mural that can be seen in the U.S. Department of the Interior building in Washington, D.C. As for the seven paintings of his at Brown, there’s no record of how the University obtained them. But they’ve been cleaned up, and four of them were on display last fall for Indigenous Peoples Day. Permission to reproduce this painting in the BAM comes courtesy of Mopope’s granddaughter Vanessa Jennings, a Kiowa beadworker and traditional artist who has been named a Living National Treasure.