How long will Christina Paxson be president of Brown? If the Corporation has anything to say about it, at least until 2022. 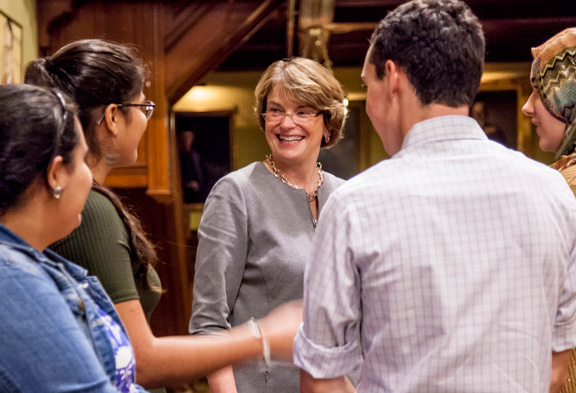 In a February 2 letter he sent to members of the Brown community, Chancellor Samuel M. Mencoff ’78 announced that the Corporation had agreed to award Paxson, who became president in June 2012, a second five-year term. Citing Building on Distinction, Paxson’s strategic plan for the University, and the $3 billion BrownTogether fund-raising campaign that will provide funding for it, Mencoff wrote that Paxson “has put Brown firmly on course . . . to elevate Brown’s stature as a leading university that unites innovative teaching and outstanding research with the aim of advancing knowledge in ways that serve society.”

Among Paxson’s accomplishments so far, Mencoff noted, were the opening of the School of Public Health, the launch of the Institute at Brown for Environment and Society, the opening of the Hassenfeld Child Health Innovation Institute, and an expansion of the Watson Institute. He also praised her efforts to build a more diverse and inclusive Brown through her plan, Pathways to Diversity and Inclusion.

“President Paxson,” Mencoff wrote, “has led Brown with wisdom, sensitivity, and balance in confronting difficult issues facing institutions of higher education in ways that have positioned Brown as a national model.”