A BOY WHO LOVED LANGUAGE

You might think that a founder of Brown’s infamous semiotics program—later the Department of Modern Culture and Media (MCM)—would be an ivory tower cliché, a deconstructionist didact looking down at the rest of us mere mortals giddy over binge reading and binge watching for the sheer pleasure of the experience. Yet no one was more amused by the semiotics stereotype than the brilliant teacher, writer, scholar, and Professor Emeritus of MCM, English, and Comparative Literature Robert Scholes, who died on December 9 at the age of 87. To Scholes, whose unremitting curiosity and intellectual restlessness made him impossible to classify narrowly, the foundation of scholarship was delight. 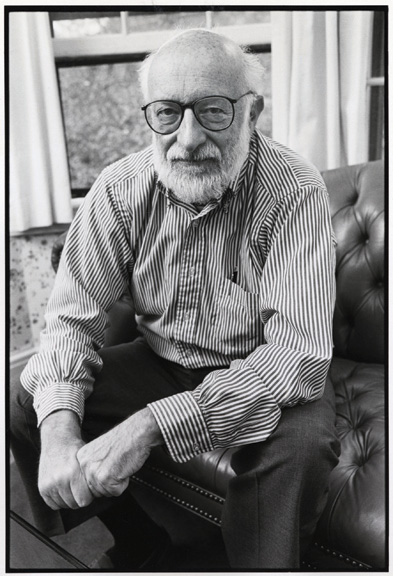 John Foraste/Brown Archives
“Once upon a time there was a boy who loved language,” he wrote in 1998 in The Rise and Fall of English, a book about teaching English that became a beacon to high school teachers around the country. “He loved it all: nursery rhymes, stories, comic books, plays, movies, advertising, instructions on packages, even school books. What becomes of such a boy? If he is lazy—and lucky—he becomes an English teacher. I was such a boy, and this is what became of me.”

At a time when critics distinguished between high culture and low culture, highbrow writing and lowbrow writing, Scholes promoted the idea—it was the foundation for semiotics—that all writing, all “texts” (and later all forms of media), are worthy of our attention. The idea that comic books and instructions on packages (“even school books”!) can reveal a great deal about our culture and also ourselves is so commonplace today that it can be difficult to understand how radical it was in the 1960s and 1970s.

Yet as a writer Scholes had a way of getting clearly and directly to the heart of the matter without having to rely on academic jargon or to riff on his own linguistic brilliance. His books were liberating and fresh. His 1966 The Nature of Narrative, cowritten with Robert L. Kellogg, was a masterly freeing of narrative from the tyranny of the novel; it argued that narrative developed as much from such “lesser” forms as folk tales, epics, myths, and allegories as it did from the written novel. (My own paperback copy, discovered in a bookstore while I was in graduate school, was so dog-eared and scarred from repeated underlining that it eventually fell apart.)

In 1977 he coauthored an influential history of science fiction, and in his spare moments, it seemed, Scholes was also a provocative critic and a historian of modernism. His 1994 Hemingway’s Genders, cowritten with his former graduate student Nancy Comley ’71, ’77 PhD, rescued Hemingway from the reductionism of some feminist critics by arguing that the late Hemingway books, and in particular those published posthumously, were sanitized versions of his manuscripts intended to keep the author’s macho image intact. “The complexity of human sexuality—and especially the bisexuality of all humans—were issues that . . . were in the air that Hemingway and other artists of his time were breathing,” Scholes and Comley wrote near the end of the book. “What we have been trying to show is that Hemingway was much more interested in these matters than has usually been supposed—and much more sensitive and complex in his consideration of them.”

In the classroom, from which he retired in 1999, Scholes was a technological pioneer and a teacher with a knack for inspiring and encouraging the best from his students. He and his wife, JoAnn, were well known for hosting students for dinner and other occasions. Curious about computers all the way back to the 1960s, he worked during the 1970s with computer science professor Andy van Dam to use them to refresh learning. In what may have been the first use of computers as a collaborative classroom tool, students worked together on papers, writing jointly and critiquing one another’s work on early computer screens.

Semiotics concentrator Ira Glass ’81, the founder and host of public radio’s This American Life, told the BAM in 2000, “There are certain things I learned [at Brown], like from Robert Scholes, that I think of every day. [Like] the structure of narrative. Semiotics talks about why is this book, this movie, this play, this radio show, this television show—why does it give us pleasure? How, specifically, does it give us pleasure? What is the machinery that it uses?”

A 1950 graduate of Yale, Scholes served in the U.S. Navy Reserve during the Korean War before earning his PhD from Cornell in 1959. His first academic job was in the University of Virginia English department, where William Faulkner once spoke to his undergraduate honors seminar; the students were discussing Absalom! Absalom! that day. (Scholes wrote about the visit for the BAM in 2006.) He then taught at the University of Iowa before arriving at Brown in 1970. He served terms as president of the Semiotic Society of America and the Modern Language Association, and in 1998 was elected a Fellow of the American Academy of Arts & Sciences.

Ever the optimist, Scholes had this to say to cultural pessimists in the September/October 1998 BAM: “People are unhappy about the state of culture in general. Many blame President Clinton or the decline of religion or the influence of the media. I believe in high culture myself, but you don’t preserve it by circling the wagons. Astonishing new films based on Shakespeare and Jane Austen, for example, are keeping Shakespeare and Jane Austen alive. You preserve culture by mixing it up this way.” —Norman Boucher


THE BEND IN THE WALL

It was Thanksgiving 25 years ago when Robert Scholes first asked me to his home. Although we didn’t know each other well, I worked part-time in the Modern Culture and Media office. When word reached Scholes that I didn’t have plans for the holiday, he e-mailed me directions and invited me to come early.

I felt nervous that bright November afternoon driving down the Wampanoag Trail toward Barrington, the same road my boss took back and forth to Providence daily across four decades, quietly building a cathedral of ideas whose most prominent parapet, modern culture and media, is spoken of in the furthest corners of the academic kingdom by an acronym that manages to sound at once playful and magisterial, Roman shorthand for the cusp of the 20th century: MCM. I remember how my nervousness evaporated the instant I met JoAnn Putnam-Scholes, who let me help in the kitchen while Bob served the wine. Hours later, when it was time to leave, I told Bob how much I enjoyed getting to know JoAnn, and he replied, “I am the luckiest man in the world.”

Bob’s former students never forget his signature essay assignment, the one-page response. The formula is simple: Take two texts, whether book, film, painting, game, advertisement, bumper sticker (I don’t think he ever rejected a student’s notion of a text) and analyze them in tandem through an essay that must fit on one side of an 8.5”x11” sheet of paper. Once I mashed-up a modernist author with a painting by Paul Cézanne to tell the story of the time Bob first opened my eyes to “the bend in the garden wall.” He had primed our Joyce/Picasso seminar with just the right readings, slides, and discussion prompts; then he’d taken us on a walk down Prospect Street to see Cezanne’s Chestnut Trees and Farm at Jas de Bouffan at the RISD Museum.

I remember the twinkle in his eye. Do you see, he asked, the bend in the garden wall? How it is not like any natural architecture, but the way it was painted 100 years ago, as well as today, puts you in its 3D world? See it? Really see it? And when we did, it was uncanny. We entered a separate reality, as a rectangle on the wall on the fifth floor of the RISD Museum became a window through which we flew together across the ocean to Aix-en-Provence in 1886 to be present at the birth of modernism.

About those one-pagers: In 2010, more than fifty of Bob’s friends got together at JoAnn’s suggestion to surprise him by contributing one essay apiece to a book, Scholes Loves a Story, edited by Geoffrey Green. Many of us mentioned how, when writing for an audience of one such as Scholes, the one-page constraint is not easy. It always left us wanting to say more. I labored for days over 800 words. That crafty reader made you want to write all night! I wonder how many thousands of essential contemporary texts owe their genesis to that assignment. Without Scholes’s famous one-pagers, would we still have The Ice Storm by Rick Moody ’83, The Virgin Suicides by Jeffrey Eugenides ’82, The Undiscovered Country by Samantha Gillison ’89? Would we have PBS programs like the Emmy-nominated The Great Invisible by Margaret Brown ’94 or Steven Johnson ’90’s How We Got to Now? Without Christine Vachon ’83 and Todd Haynes ’85, there would be no Boys Don’t Cry and no I’m Not There; without Rory Kennedy ’91, no Oscar-nominated documentary Last Days in Vietnam. Since meeting Bob, this American life (mine) feels like a quarter-century of daily one-page responses. He has been looking over my shoulder the whole time, opening my eyes, that twinkle in his own. He is with me right now, urging me on without excess urgency, enjoying the ride.

The jacket photo of Scholes Loves a Story features a photo of Bob and JoAnn at Colt State Park in Bristol, Rhode Island. On the best days, Bob would drive home to Barrington in time to pick up JoAnn and go for a walk here, along the bend in the wall, holding hands. Even with their backs to the camera, you can feel how happy they are, JoAnn and the luckiest man in the world. —Robert Arellano ’91, ’94 MFA