The Cost of Skepticism
Scientists advance climate prediction models as the U.S. lags behind. 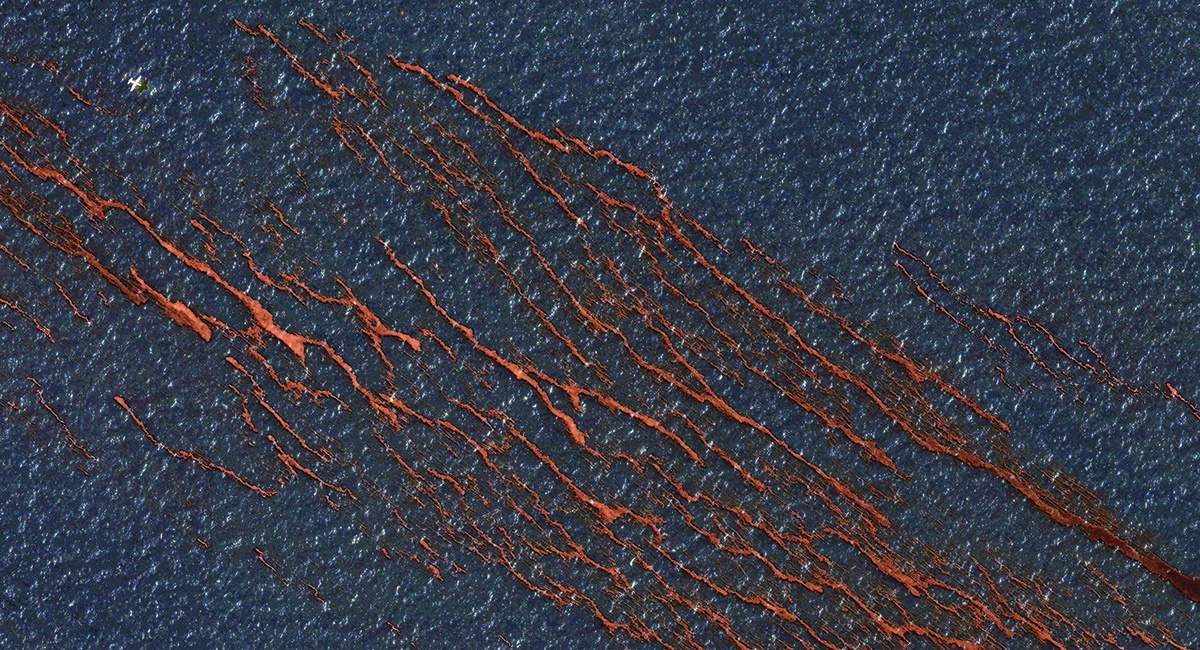 Langmuir windrows—lines formed by the wind—through oil slicks after the Deepwater Horizon spill, via satellite. These lines can provide key insights on climate change.Photo: Digital Globe
1 - FOLLOW THE MONEY

It’s been a hard year, I have to tell you,” J. Timmons Roberts said after returning from the UN Climate Change Conference held in Bonn last November. Roberts is the Ittleson Professor of Environmental Studies and director of the Climate and Development Lab (CDL). His conclusion? “Literally every country in the world is moving ahead [on reducing carbon emissions] without us.”

On the other hand, Roberts is pleased that in December, World Bank president Jim Yong Kim ’82 declared that the bank will no longer finance fossil fuel development. And with a lack of federal action on curbing carbon emissions, Roberts praises Massachusetts, California, and several other states for taking action to reduce them on their own. He says it might even be possible to meet the United States’ international obligations without federal leadership.

An expert in international climate finance policy, Roberts nevertheless emphasizes moral imperatives: because the West in general, and the United States in particular, has benefited most from fossil fuels, he says, they need “to show leadership and help developing countries cope,” aiding them financially to avoid an over reliance on fossil fuels.

FROM THE WORLD BANK PRESIDENT

“To ensure alignment of our support to countries to meet their Paris goals, today we are announcing that the World Bank Group will no longer finance upstream oil and gas, after 2019.”
- Jim Yong Kim ’82,
December 12, 2017

Climate change will also increasingly influence another hot political issue: immigration. As sea levels rise and droughts get worse, people fleeing these conditions become refugees. “That’s already happening, destabilizing places around the world,” Roberts notes. Even U.S. Secretary of Defense James Mattis admitted as much during his confirmation hearing last year, when he told senators that “climate change is impacting stability in areas of the world where our troops are operating today.”

Having invested billions of dollars internationally on business and trading partners, the United States should protect its investments through climate action, Roberts insists. “Those decades of development are all at risk if they can no longer grow crops or their cities become uninhabitable.”

Universities like Brown also have an important role, he says, in combating climate change denial: “I think that’s really where Brown can make a big difference. If we can’t speak up about this, then who’s going to?”

Since 2010, Roberts has been training the next generation of climate activists by, among other things, taking them to international climate meetings. Last fall, he took 15 students to Bonn to observe how the 18,000 conference delegates attempted to hammer out ways to turn the broad 2015 Paris conference goals into specific actions.

Because the Trump administration has promised to abandon the international climate agreement in 2020 and has been quietly reversing rules banning oil and gas exploration on public lands and such little-known policies as removing consideration of greenhouse gas emissions from environmental reviews, the students did not expect the United States to be much help in Bonn.

“We went in with the understanding that the United States is no longer committed,” says Julianna Bradley ’17. Even if it were, she says, the Paris agreement alone cannot reverse the problem of global warming: “The Paris agreement is a big deal, but it is by no means a saving grace.”

Born the same year that the U.N. climate process began, Bradley became active on climate change after viewing An Inconvenient Truth, which features Al Gore and was directed by Davis Guggenheim ’86.

“The best way to address the fear and anxiety about climate change is to act on it,” she says. “Otherwise we’re just going to sit here, and the world is going to get hotter. If we don’t do something about it, as a generation, then it is going to even more deeply define us than it already has.”

To model something as big as Earth’s climate, you have to understand the oceans. Baylor Fox-Kemper, an associate professor of earth, environmental, and planetary sciences, studies Langmuir circulation, a current that can have a significant impact on the ocean’s absorption of carbon emissions. When wind blows in a steady direction over open ocean water, running parallel to the wind are lines of foam made by long vortices of slowly rotating columns of water. The lines form because adjacent columns rotate in opposite directions, creating a signature of foam and debris on the surface.

For the last decade, Fox-Kemper has studied how this special wind-mixing affects the climate system. Air meets ocean at the boundary layer—the top layer of ocean, which absorbs such components from the atmosphere as energy, oxygen, CO2, and fresh water. A warmer climate means more wind and warmer water, which can accelerate the mixing of this top layer. “The rest of the ocean only knows about the boundary layer,” he explains. “Langmuir mixing makes that boundary layer deeper. That extra mixing really matters.”

About half the carbon dioxide produced from burning of fossil fuels ends up in the oceans. But whether it’s 40 percent of the CO2 or 60 percent has a lot to do with this boundary layer. Langmuir mixing connects the atmosphere to more of the ocean than we thought. “Exactly how much of the energy and momentum get taken out of the wind and put into the ocean depends on that boundary layer,” Fox-Kemper explains.

Plug all these insights back in to the latest climate models, and you’ll get a more accurate prediction of sea level rise. “It has practical consequences,” Fox-Kemper says. He is now using his work to improve the models of Narragansett Bay as part of a five-year National Science Foundation project with eight cooperating Rhode Island institutions.

“We know already that there are substantial environmental and climate change-driven challenges coming,” he says. “What can we do better to get from the global scale down to the scale that matters for local management decisions?”

Reader Responses to The Cost of Skepticism

Erik Ness could benefit from a reality check. His headline “U.S. lags behind” and his failure to vet J. Timmons Roberts’s claim that “literally every country in the world is moving ahead on reducing carbon emissions without us” ignores the fact that privately funded advancements in fracking have resulted in the United States reducing carbon emissions more than any other country. While talkers talked, doers did. He writes: “Follow the Money,” but doesn’t—perhaps sensing that the facts are overwhelmingly negative to his narrative. If I understand him, he also ties the world’s refugee crises to sea-level rise and drought, though evidence seems to implicate political factors more than weather. Elsewhere in the same issue a writer extols the concept of “challenges to pre-existing beliefs and not just affirmation of them.” It appears the determined frackers and other relentless inventors ran with that idea, nicely. Evangelizing may turn out to be a lot more costly than skepticism.

Erik Ness writes that the United States lags behind as scientists advance their climate prediction models (“The Cost of Skepticism,” The Big Issue, March/April). Like many such articles, the cost of the solution to this despair is overlooked: the costs of the Paris Accord, the world’s massive and comprehensive plan to act quickly on apocalyptic climate change.

As a result of this agreement the world is requested to (1) lower carbon emissions to near zero as it transitions to solar, wind, and geothermal energy,  and (2) use this alternative energy to remove and store geologically enough CO2 from the atmosphere to take us back to 1987 levels. This “sink” for carbon is an untested geoengineering approach that is far from ready to operate at global scale.

More serious than cost is the added time necessary to accomplish these quixotic goals. It will take hundreds of generations to reach zero emissions.

All this is separate from “denial” or whether the global climate is changing unidirectionally or not, or even whether the models are accurate. How the world ultimately reacts to this impractical, lengthy, and expensive venture will indeed define the future.