Far From All Fair Guidance
At dusk, a Puritan woman wakes up from a nap in the woods. 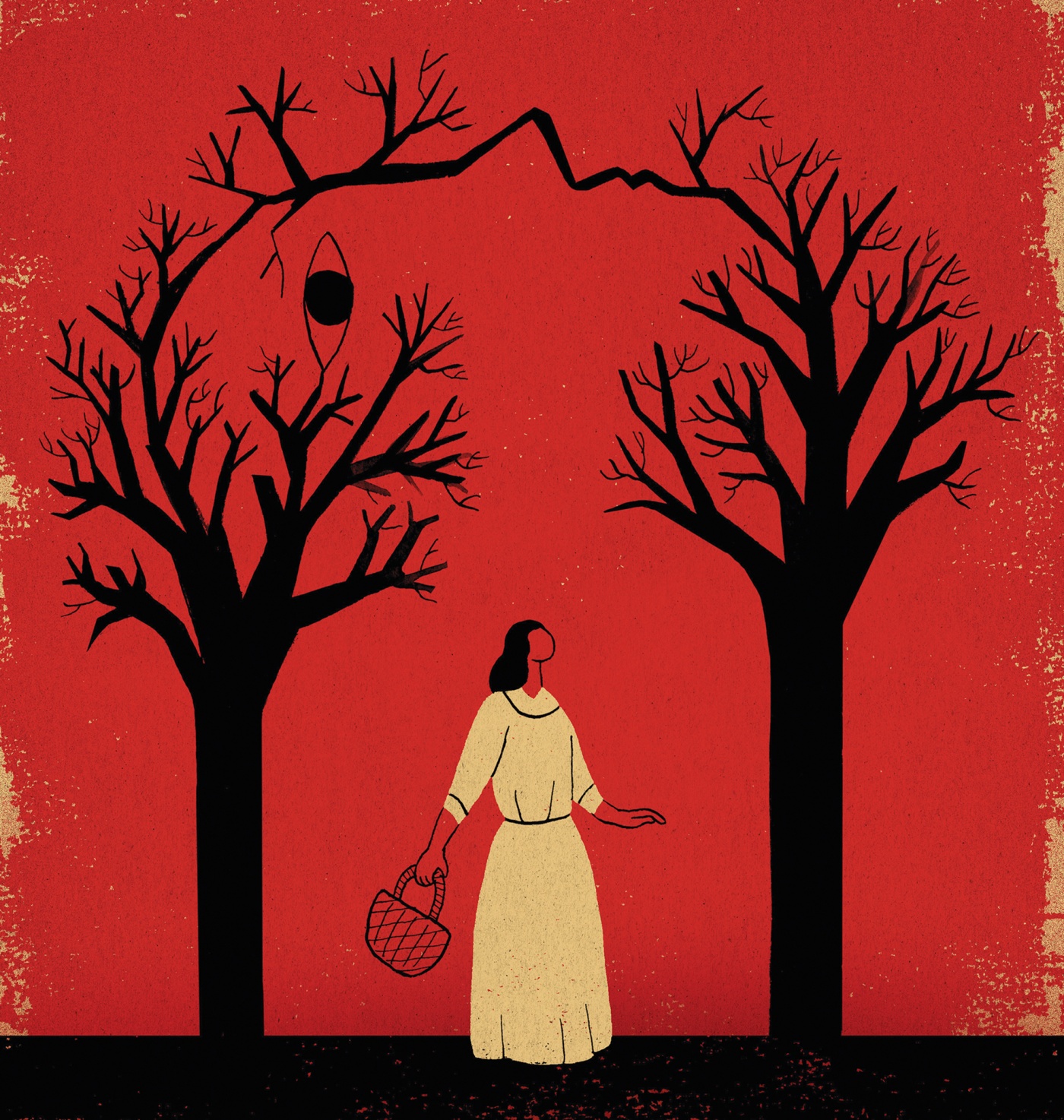 The sun was gone from the glade and gone almost from the world when I woke and took up my basket and went hurrying back the way I had come. I smiled a little but didn’t mean it when the oak and ash and box elder began to grow tall around me and my trot turned into a run. There are fears in the airs and on the earth that can call up a fire in your heart whose ash will blacken all hope. This was not such a fear; it was just the little toe or finger of one. I stopped running and wiped my brow and realized I had left my bonnet behind. I shifted my basket from one hand to the other. I stood with my legs planted sturdy and gave a laugh, for I had never liked that bonnet, blue with a frill of tender flowers. A gift from my dead mother.

I took a sniff at the air to see what it would tell me. But the smell was bitter somehow and weak and I could make no meaning of it. There came a crackling as of steps a way off in the dusk light and for a moment I thought it was my fellow berry hunter, but it was not him. It was not my husband and it was not the girl in yellow either. It was no one. I hooked my basket on my arm and thought to say a prayer but found it hard to bow my head and press my hands together, so I set first to walking then running again. When I stopped it was because I had caught a root and had fallen, and as I was rising I remembered I should feel at the trunks of the trees to see where the moss grew best. I felt at one tree and then at another. The moss was scattered thick and cool, and even on the third tree it grew hardiest on one side. But then I couldn’t bring to my muddled mind in which direction the moss liked to grow. My man had told me. Had told me in case I was ever in the woods and felt lost. It was a great wide new world we had come to after we had left our troubles behind and he had told me were I ever to wander into its shadows, the moss could help me find my way out again.

Now and again I stopped, trying to hear what I could hear beyond my breathing. There were bats at work. Bigger things too.

Now in its shadows I was. With wet moss tufts at my fingertips. Far from all fair guidance. Alone and now it seemed to me I could hear my son crying through the dark. Weeping for his mother lost. And that I could hear myself, somehow, holding him tight in my arms, crying with him, my cry deeper and longer, almost a howl. Off toward this crying I ran. And realized, when I began to catch speed, that the ground was falling away beneath me and though I liked the feeling of racing downward I stopped because I had not, in coming, climbed any hill. My basket was gone now too. There was little moon and the air seemed made of black butter. Some mist was about. I moved slowly through vines that crept across the course of walnut and hickory. Now and again I stopped, trying to hear what I could hear beyond my breathing. There were bats at work. Bigger things too.

In our new-built barn we had had an owl to visit just the past week and it had chased away the many pigeons that had fouled our sheep and goat stall, fouled our cow stall, fouled the soft dirt over which we came and went each day. The owl had stayed in our rafters long enough to see off the doves and pigeons and then it had left again. My son had found the bones of a rabbit beneath its roost, and my man had hung its skull above the door from a piece of purple thread he took from one of my bobbins and said it would keep the pigeons from coming in again. I laughed at him and earned something sharp when I said I didn’t think such work was godly, but so far he was right. Often he was right. No new pigeons had come. Now, here, an owl went its swooping way through the trees and something squealed. My legs were heavy when I heard this squealing, long and loud, so I did not run. I thought I saw eyes off in the darkness, eyes open at the very minute of their own ending, but how could this have been, for there was almost no light in the woods, just the smallest sliver of a moon?

Excerpted with permission from In the House in the Dark of the Woods, the critically acclaimed new novel by Laird Hunt. Hunt is a professor in the literary arts program, the author of seven novels, and a former United Nations press officer.

Reader Responses to Far From All Fair Guidance