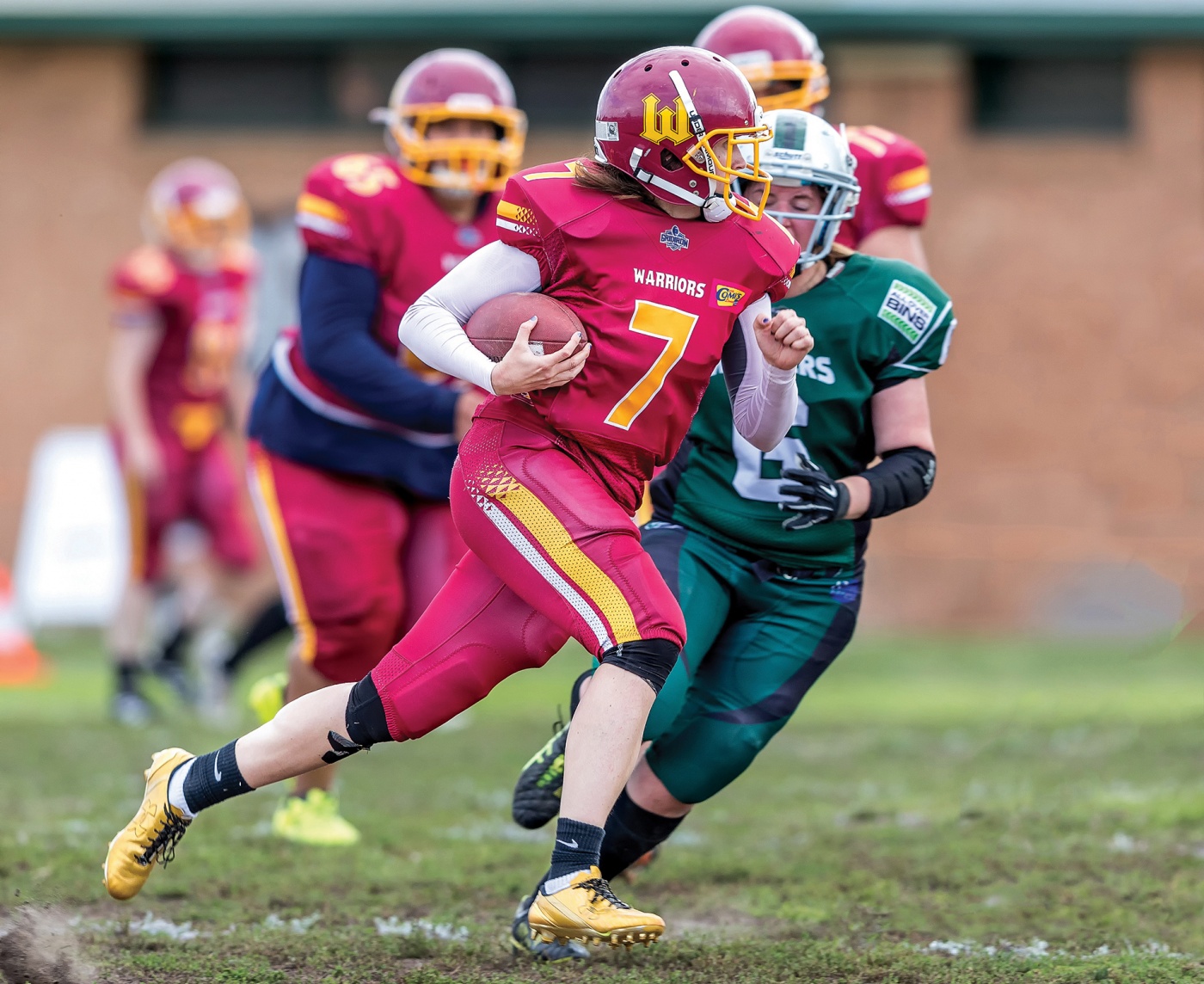 Bears quarterbacks coach Heather Marini (with the ball) had a brief career as a quarterback in Australia. John Torcasio

Brown head football coach James Perry had a simple set of criteria when he hired Heather Marini. “I just wanted to hire the best, smartest coach I could find,’’ he says.

Perry made Marini his offensive quality control coach in 2019—the only female assistant coach in Division 1 football that year (Callie Brownson, a former Dartmouth coach, was the first-ever, but she has since moved to the NFL).  Marini described her role for the Bears last season as “assistant coach to all the assistant coaches.”

That “assistant to the assistants” role didn’t last long. On Monday, March 16, 2020, Brown Football announced Marini’s promotion to quarterbacks coach, making her the first female position coach in Division I football history. “In one season with our program, Heather has done a great job,” said Brown head coach James Perry. “She has proven through her efforts in the office every day with us in an off-the-field role that she's ready to run the quarterback room.”

Although her new role is a first for women, Marini says she expects to see more women coaching at the Division I level soon, once the powers that be “become aware that we exist, will work hard, and can talk and coach football.”

As for Marini, her favorite part of the job may be coaching the mental side, she says. “My philosophy is all about developing thinking athletes, making them better than they were the week before.”  Marini uses terms like “Game IQ” and says she teaches athletes to be more thoughtful in all ways, including in the classroom.

Marini’s career path began in her native Australia and did not start until she was 17. That’s when the man she was dating, a player at Monash University in Melbourne, took her to a game to watch him play. She immediately fell in love with every facet of the game, says Marini, now 30—from the Xs and the Os to the individual bio-mechanics “like how to make a wide receiver run faster.

“Football is the culmination of every other sport you see. It’s like all the other sports rolled into one.’’

She also fell for the player she watched that day. That man, Kieren Marini, would later become her husband.

Marini, who had coached and played a variety of sports, soon began coaching football and moved up the ranks, eventually rising to head coach of the under-19 men’s football team at Monash. In 2016 she added playing to her resume, becoming the runner-up league MVP as a quarterback for a new women’s tackle football club team. But even that season she kept coaching, basically acting as offensive coordinator while playing.

Marini joined the Brown staff after interning in the pro scouting department with the New York Jets. She had gotten the attention of both the Jets and coach Perry while attending the NFL Women’s Careers in Football Forum.

“Promoting Heather to our quarterback coach makes us a stronger program and I know she will be a pioneer in the expanding roles women have in collegiate football,” says Perry, who thinks Marini could become a head coach one day. “It’s always a long shot to become a head coach,’’ he says. “But she has the kind of talent that she could do it.’’