New Directions
The pandemic shifted these three seniors off careerist paths and into doing what they love. 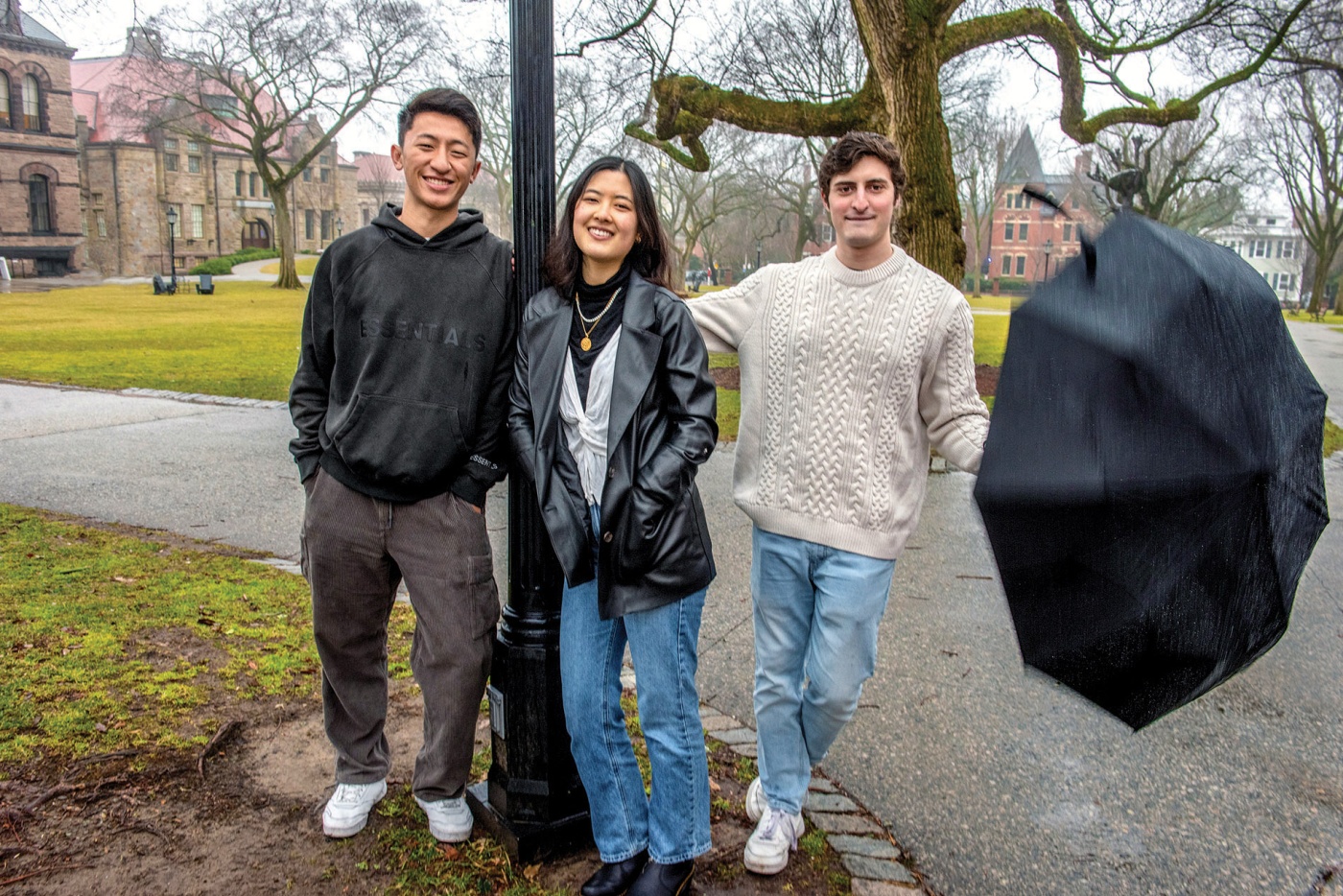 Seniors Bryan Guan (left) Tracy Pan, and Ben Michals all took a bit of a left turn thanks to the lockdown. Photo: David DelPoio

When classes went virtual, three Brown seniors paused their studies in software engineering, consulting, and medicine, and put their time into their creative passions. Ben Michals ’22 made TikToks for an audience of 145,000. Bryan Guan ’22 learned to DJ and was hired for parties on campus throughout the fall semester. And Tracy Pan ’22 became a line cook for Persimmon, an upscale restaurant in Providence. Thanks to the lockdown, their lives have taken a different course—one more focused on personal fulfillment than on traditional careers and their previous ideas of success.

Ben Michals ’22, a music and computer science concentrator, thought he was headed for a nice, stable career in tech. Then, after noticing a surge in TikTok’s popularity during the pandemic, he set out to produce six-second “jingles” on his own account. On the last day of the spring 2020 semester, he determined that he would give social media “his best shot.” If his account didn’t grow, he would interview for software engineering jobs.

Michals posted his songs consistently for two months for an audience of 20 followers. But in July that year, a more popular TikTok user reposted his video and it went viral, amassing thousands of followers within days.

His content points out the absurdities of life: for example, “I have so much stuff I should probably do today but I don’t want to do today… so let’s make that future me’s problem.” Michals is hoping to continue TikTok, working with brands such as Facebook, Google, and HBO, while juggling his full-time job.

Hating Zoom caused Bryan Guan ’22 to re-evaluate his career in consulting completely. In his first couple of years of college, Guan joined Brown Consulting Club and took trips to New York City several weekends to network with professionals. He expected to work in consulting junior year but struggled during virtual interviews. In his time of job anxiety, he turned to music as a source of comfort.

The poetry of rap music, plus its rhythm and movement, inspired Guan to explore DJing. Starting in January 2021, he created a makeshift home studio and began mixing beats.

By shifting his mindset away from receiving a job offer, Guan focused on the journey of creating his own distinct sound. Already, he had spent most of his days listening to music, which had been his passion since marching band in high school. “I never learned anything so quickly,” Guan says, “I was in the flow state, following these YouTube tutorials, learning five hours a day.”

At the beginning of the fall semester, Guan started DJing professionally at parties for the Korean-American Students Association and gatherings off-campus. He plans to move to New York after graduation and play local gigs. Aside from producing his own music, Guan is also seeking to understand the industry better and work in a studio role.

As an aspiring doctor, Tracy Pan ’22 felt that all her activities needed to service her medical school application. Any extracurriculars should enhance her resume. But during the pandemic, she started cooking for her family and returned to her childhood dream of becoming a chef. So, in the summer of 2020, Pan interned at Persimmon, cutting 30 pounds of carrots and learning to navigate the physics of moving bodies in a kitchen. She began working three shifts, each around seven hours long, weekly during her senior year.

“Anyone can chop an onion in an hour,” Pan says. “But I had to learn to chop one in 15 seconds.” In the flow of peak restaurant hours, Pan experiences a meditative feeling around the seven other line cooks. Whether it’s from standing in the smoke of grilling squid or plating delicate leaves of thyme, Pan anticipates these respites from her academics. Although she still hopes to become a doctor, Pan says, “being a cook is the single thing that has made my college experience.”

Advancing knowledge and understanding in the service of society
First Person