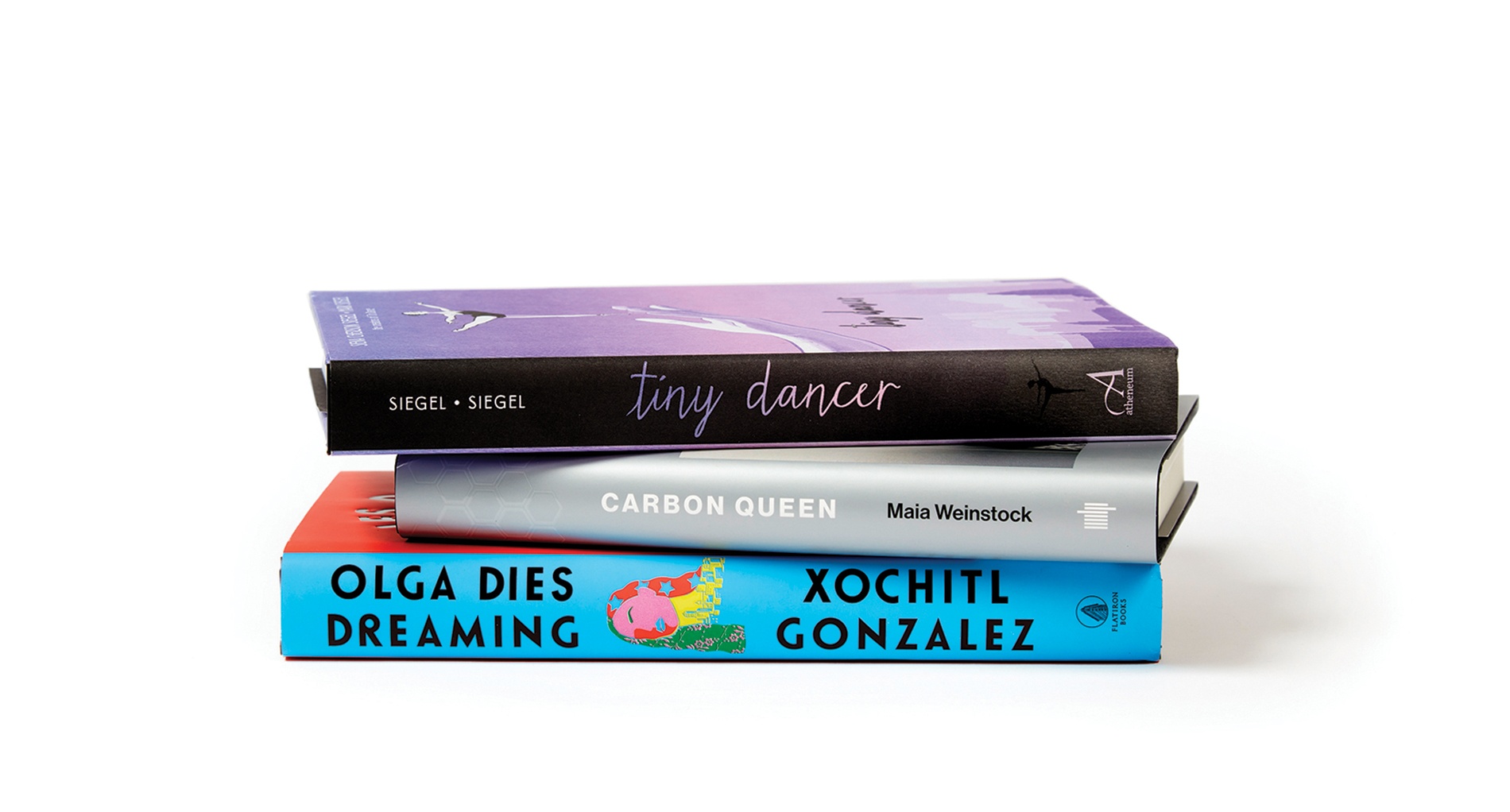 Olga Dies Dreaming by Xochitl Gonzalez ’99 (Flatiron Books)
Set in 2017, this rich, intricately layered debut centers on Olga and Prieto Acevedo, Nuyorican siblings who are navigating life in the shadow of their activist mother Blanca, who abandoned them as children. Olga is a successful, disillusioned wedding planner for the 1 percent and Prieto is a congressman making compromises while his Brooklyn district gentrifies. As the novel deepens, secrets are revealed, and there’s blackmail, new love, suspect business arrangements, and plenty of commentary about diaspora, class, and Puerto Rico’s colonial history.

Carbon Queen: The Remarkable Life of Nanoscience Pioneer Mildred Dresselhaus by Maia Weinstock ’99 (MIT Press)
Mildred “Millie” Dresselhaus should be famous—that’s one of the major threads in this very readable biography. The longtime MIT engineering professor’s work led to discoveries about the electronic structure of carbon, which led to leaps in nanotech. Born in 1930 to Jewish-Polish immigrants in New York, Dresselhaus, who died in 2017, grew up in an era when career choices for women were largely narrowed to teacher, nurse, or secretary. But with an aptitude for math and a persistent curiosity, she joined MIT’s faculty at a time when women scientists were a distinct rarity.

Tiny Dancer by Siena Cherson Siegel ’90, art by Mark Siegel ’89 (Atheneum)
In this lush, purple-hued YA graphic memoir, a collaboration between a husband and wife team who met at Brown, Siena Cherson Siegel follows up on her 2006 memoir To Dance. After her first ballet classes in Puerto Rico in 1974, we head to New York, where Siena has moved with her mother to start seventh grade and join the School of American Ballet. The narrative weaves through her teen years, full of complications and judgments and an ankle injury that derails her ballet dreams. But eventually Siena makes her way to Brown. Tiny Dancer captures both what it can mean to cling to a narrow path and what it can feel like to dance.

Goodbye Anxiety by Terri Bacow ’01 (Spruce Books)
In the Year of the Rabbit by Terence A. Harkin ’68 (Silkworm)
The Home-Scale Forest Garden: How to Plan, Plant, and Tend a Resilient Edible Landscape by Dani Baker ’70 (Chelsea Green)
Left Behind: The Democrats’ Failed Attempt to Solve Inequality by Lily Geismer ’03 (Hachette)
Noah’s Rejects: A cautionary tale about life on an island paradise by Rob Kagan ’89 (Atmosphere)
Welcome to the Grief Club: Because You Don’t Have to Go Through It Alone by Janine Kwoh ’09 (Workman)
Lefty & Tim: How Steve Carlton and Tim McCarver Became Baseball’s Best Battery by William Kashatus ’84 AM and Larry Christenson (Univ. of Nebraska)
Get Your Startup Straight: The Definitive Storytelling Framework for Innovators and Entrepreneurs by David Riemer ’80 (River Grove Books)
The Book of Ruth by M. Ruth Little ’72 AM (Lystra Books)
Brain Storm: From Broken to Blessed on the Bipolar Spectrum by Sara Schley ’82 (Seed Systems)
Understandable Economics by Howard Yaruss ’80 (Prometheus)

Sleeping in the Dead Girl’s Room by Cynthia Bargar ’70 (Lily)
No Sign by Peter Balakian ’80 PhD (Univ. of Chicago)

The Changing Tides of Maine by Polly Welts Kaufman ’51
The Heart & Brain Play Jump Rope by John Kennedy ’92 MD
The Adventures of Yadel the Dreidel by Andy Lazris ’86
18 Holes with Belichick and Brady by Benjamin Plaut ’91
Do the Work!: An Anti-Racist Activity Book by W. Kamau Bell and Kate Schatz ’05 MFA (Workman)