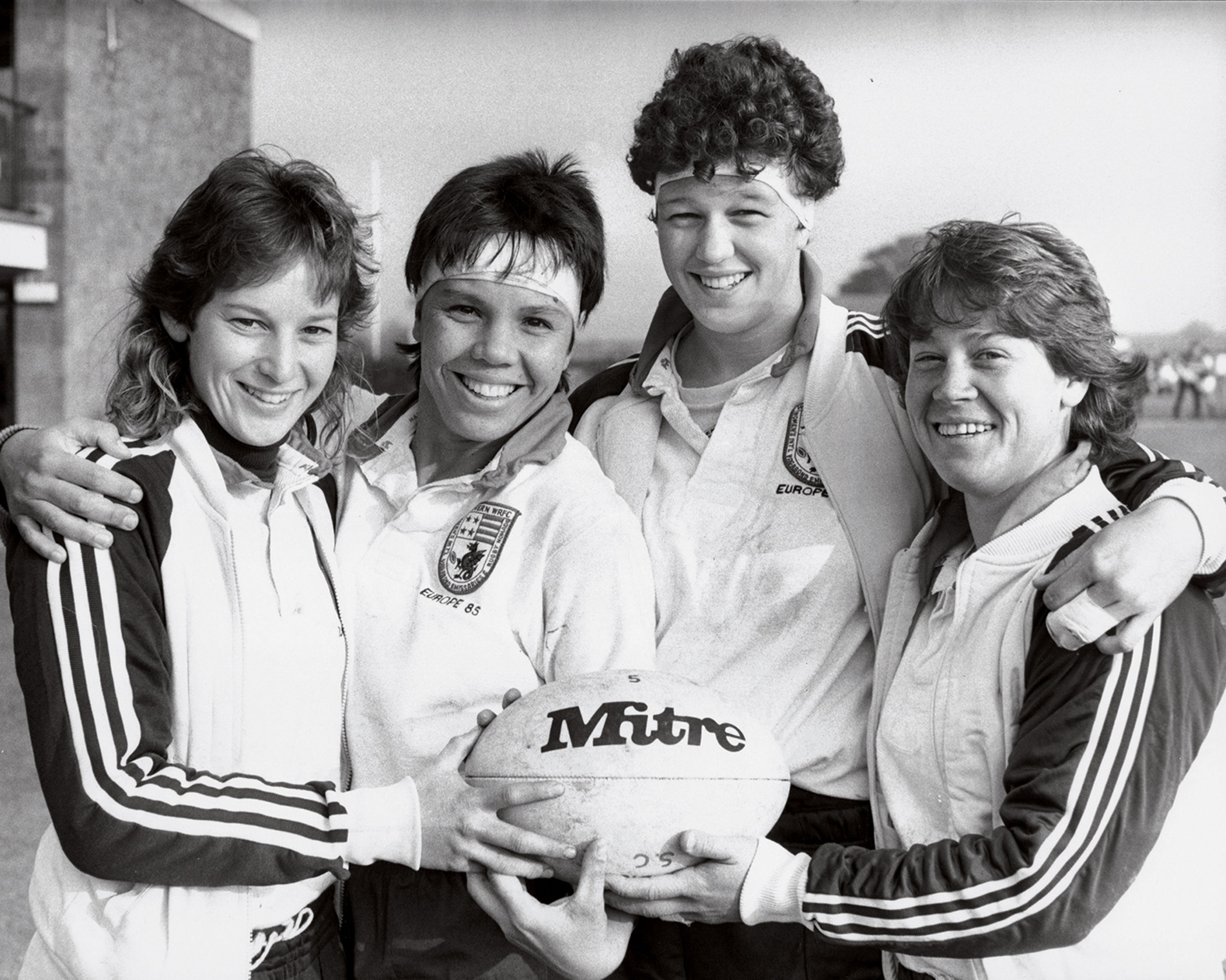 Ruth Berwick, Flores, Nancy Thorley and Chris Harju while playing on an American team at a tournament in Shenley, England, in 1985.PHOTO: BILL CROSS/ANL/SHUTTERSTOCK
In Memoriam

Coach Kathy Flores was the sort of woman who made you feel like you could do anything. Not invincible like some kind of imaginary superhero, but human—beautifully, powerfully human.

“She didn’t ever push us to be anybody other than ourselves, but rather pushed us to be our best selves,” says Alexis Jackson ’21, who walked onto Brown’s rugby team in 2017 after, like many players, being drawn to Flores’s magnetic personality.

A pioneer in women’s rugby who charted the sport’s course for much of its recent history and a fierce advocate for diversity on the field, the 66-year-old coach passed away in her Providence home last October after a year-long battle with cancer. Born Kathleen Theresa Flores, but known affectionately as “Coach Kathy,” the Philadelphia native leaves behind the legacy of her chosen family: dozens of rugby players who called her teammate, friend, and mother.

Zyana Thomas ’22 vividly remembers her introduction to the woman who would soon become her “second mom” the summer before Thomas’ freshman year, when Flores volunteered to pick her up from the airport on her very first day in Providence.

“I was like, ‘Whoa, she actually cares about me,’” recalls Thomas, who was recruited to Brown’s rugby team during her senior year of high school. “I had never experienced a coach like that.”

Beyond athletic mentorship, Flores also stood in as an on-campus parental figure for many young women on the team, committing time to develop personal relationships with every student and offering consistent emotional support.

“I had a rough transition to Brown. I really felt alienated, and the only person who was by me and with me through that was Kathy,” Thomas shares. “She would quite literally walk me to therapy appointments… I probably would've never started healing if I had never met her.”

As a newcomer to a team that has long been predominantly white, Jackson adds that she felt particularly welcome because Flores was so open about her identity as a lesbian woman of Hawaiian and Filipino descent. “As a Black queer woman, if something ever happened that made me feel uncomfortable, I knew at minimum that she would know what I was talking about,” says Jackson. “I wouldn't have to explain my existence to her first, to get her to understand.”

“She was an amazing strong gay woman and the team was a really queer space, and that was hugely influential,” adds Sofie Rudin ’17, who was a first-year on the team during Flores’s first season coaching Brown rugby in 2013. “But Kathy is in the hall of fame because of how she pioneered this sport: she just did it. She worked hard and played hard, and if you were there with her, you were welcome. It was really simple.”

In addition to two Rugby Hall of Fame titles, Flores also boasts nearly a dozen U.S. Rugby Championship wins and a significant role in securing the first-ever rugby World Cup trophy for Team USA. But among her most cherished accomplishments were the strides she made as a coach at the collegiate level, elevating Brown’s team from club players to varsity athletes during Rudin’s sophomore year.

“I loved that from the start [she] wanted to take it really seriously. Playing casually… wasn’t an option anymore, because Kathy held people to a high bar,“ Rudin explains. “She was really passionate about empowering women to learn to use the full power of our bodies.”

As someone who felt “kind of left out being bigger and taller” than other female athletes growing up, Jackson echoed Rudin’s sentiment that the love and empowerment grounding Kathy’s training was transformative, both on and off the field.

“I remember her telling me early on: ‘You’re not here despite the fact that you look this way. You’re here because you look this way, and we’re actually going to make sure that you get bigger and that you take care of yourself, because you come with certain strengths that nobody else can contribute,’” Jackson recalls. “That was the first time I've ever had a coach look at me—all of me—and say, ‘This is what I want. In fact, this is good.’”

A woman who delighted in wine, dogs, and dancing (Pharrell’s “Happy” was a team favorite), Flores was above all a fighter, undeterred by metastatic colon cancer and dedicated to her sport until the very end.

Thomas remembers Flores in her final months, still attending recruiting events with the other coaches. “It was kind of funny to see this old lady with cancer, barely able to walk, and she wanted to go play mini golf!” she says.

“Kathy had this knack for taking people and then fully believing 100 percent in them, no matter what. She never gave up on anybody, not even herself,” Thomas adds. “She was like, ‘I'm going to be coaching up until my last moments.’ And she did.”