Soccer is a women’s sport in many parts of the world, but in England it remains very much dominated by men. So when Julie Foudy, the Olympic soccer star, traveled to England to meet her future husband’s family, her future mother-in-law asked, in disbelief, whether Foudy actually hits the ball with her head. “I was like, ‘No, I don’t actually head the ball,’ ” Foudy joked. “ ‘That’s unfeminine.’ ” 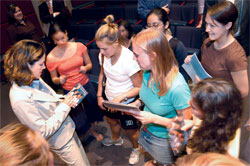 Foudy spoke at Brown in May as part of a panel on women’s athletics, the inaugural Sports in Society Colloquium. The other panelists were sports commentator Mary Carillo, who was a competitor on the women’s professional tennis circuit, and Donna de Varona, a 1964 Olympic gold medalist in swimming and one of the first female sportscasters.

The talk had a girlfriend-to-girlfriend feel, with the three women chatting around a coffee table on the Salomon Center stage. The audience was heavily, but not entirely, female. Even today, Foudy told the crowd, some argue that women shouldn’t compete in the ski jump because it could be hazardous to their ovaries. But in other respects, the women agreed, much has improved for female athletes over the past thirty years: there is more scholarship money, more opportunity, and more respect. And, Foudy said, her in-laws have become women’s soccer’s biggest fans.