He Swims with the Fishes 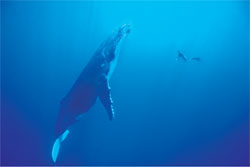 Growing up on the beaches off Key Biscayne, Florida, Peter Zuccarini ’88 purchased his first underwater camera when he was eleven so he could film his friends’ spear-fishing adventures. Still swimming and shooting thirty years later, Zuccarini is about to make his biggest splash yet as the underwater cinematographer for Johnny Depp and Keira Knightley’s deep-sea sequel Pirates of the Caribbean: Dead Man’s Chest, which opens July 7.

“In Pirates, my role is mostly using the camera to look at things as they move in and out of the water so there’s a seamless transition,” Zuccarini said in a phone interview from Miami, where he lives with his wife and year-old twin sons. “For the last year, I’ve been filming right at that interface where water meets air.”

In this, his second Pirates movie, Zuccarini’s handiwork includes a sequence in which Kraken, a giant squidlike sea monster, rises out of the deep to demolish a hapless clipper ship. While the fantastical creature was created in a visual effects studio, Zuccarini was in real danger while shooting the movie’s tumultuous opening scene. The plot calls for Depp’s Captain Jack Sparrow to escape from a cliffside prison in a coffin that’s swept out to sea by thunderous surf. Director Gore Verbinski and cinematographer Dariusz Wolski wanted the real thing and dispatched Zuccarini to St. Vincent, in the Caribbean. There, on the island’s rocky eastern coast, the cinematographer faced brutal winds gusting in from the Atlantic Ocean. 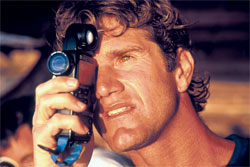 “I walked down to the cliffs with these twenty-foot waves crashing into them and literally started laughing, it was so crazy,” Zuccarini recalls. “But they’d flown me all the way there because I’m the person who can figure out how to get an angle from the water without getting sucked out to sea.” He didn’t want to chicken out. In the end, he says, “We actually got some pretty cool shots with the waves frothing all the way up to the top of the cliff.”

Over the years, Zuccarini has filmed close-ups of alligators, whales, and sharks—all without injury. But an ill-fated Discovery Channel project resulted in a shark-bites-man incident that the network airs on its annual “Shark Week” special. “I have the dubious distinction of filming the only shot ever of a person being bit underwater by a shark,” Zuccarini notes. “A researcher who was standing in waist-deep water actually had his calf bitten off eighteen inches from my lenses while I was filming him. That was the last shark film I worked on for the Discovery Channel.”

Since completing Dead Man’s Chest, Zuccarini has been shooting a Coldplay music video and a new TV series called Aqua Man. He’ll film the third installment of Pirates in the fall.

“I’m actually more comfortable in the water than not,” he says. “You hear about Eskimos having fifteen names for snowflakes? Well, when you spend a lot of time in the water, you notice all kinds of qualities. Algae makes this beautiful green, and tannic water from the swamp creates beautiful shafts of light, and there’s crystal-clear Bahamian water and pristine water from the springs when we shoot in Florida. I’m just an addict and connoisseur of all things water.”

Reader Responses to He Swims with the Fishes