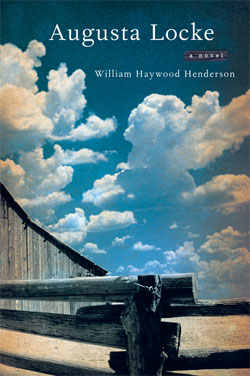 Novelist William Haywood Henderson has won acclaim for his ode-like narratives of the West—its wide-open spaces, its survival-scrabbling nature, its ranch hands and drifters. Of his last novel, The Rest of the Earth, Annie Proulx noted, “Henderson writes some of the most evocative and transcendently beautiful prose in contemporary American literature.”

And he does. Henderson’s new novel is set primarily in Wyoming’s vast open spaces: “Too many horizons between here and there, too few roads, and none of them marked, too many days of cloudless wind, too few nights when the day’s heat lingered after the last white hint of sunset.”

The story chronicles the life of Augusta “Gussie” Locke through much of the twentieth century. In the tradition of Ole Rolvaag’s Giants in the Earth or parts of Willa Cather’s canon, Henderson, who grew up in Colorado and Wyoming, examines the ways pioneer survival in the western plains spawned a mixture of heroic, feral, and gender-bending behaviors.

Born in the Minnesota woods in 1903, Gussie is a recluse from childhood on. Like the animals and birds she studies, she is as “quiet as a hunter,” observing the minutest details of movement, sound, light, color, and texture in her wilderness life. When humans disappoint or surprise, she just moves on, occasionally letting out a squawk like her favorite bird, the raven; more often, she just accepts, impassively.

With her mother and then a daughter of her own, Gussie lives a restless, nomadic life that leads her west to Colorado and then north to Wyoming, where she runs supplies to oil and mineral crews in the Great Basin Divide. She often passes as a man in her strength, practical knowledge, and taciturn manner. Indeed, she becomes a legend because she knows the land, the ways of weather and nature, better than many men coming out to try their luck in the 1920s and ’30s.

Gussie’s mantra is “I can take care of myself,” and almost inevitably her daughter takes off as soon as she, too, becomes self-sufficient. For all Gussie’s supreme competence, she is so emotionally cramped that she feels like a female version of the cowboy stereotype.

Henderson’s lyric vividness seduces the reader sentence by sentence, but his narrative moves at such a stately pace that halfway through this 400-page novel, the story line loses air; we seem stuck eternally within Gussie’s mute, numb vision, “the desperate hollowness of her thoughts.” The prose finally regains energy as it moves toward a serendipitous end. We see Gussie in flashbacks remembering loves and connection we wish we had seen earlier, if only to show she was indeed complicated—occasionally passionate and alive, not just surviving.

Then, as luck would have it in this story of accident and chance, during World War II, as Gussie and her crew of volunteer firefighters clean up a plane crash on a mountainside, the father of her long-lost child walks into their campsite.

In that moment Gussie’s emotional life reawakens, leading to an eventual reunion with her daughter, a grandchild, and a great-grandchild. The liveliness of the last seventy pages almost makes up for the long, slow middle journey of this paean to the harsh beauty of the West and the lives it shaped like water running through granite.