Kevin Costner was at Campus Dance. At nine o’clock the next morning, Michael Kinsley, the former editor of the New Republic and the founding editor of Slate, sat listening in the audience at a Commencement forum. Each of these men is a star in his chosen field, yet on this weekend they had no role. Nor should they have had one. On Commencement weekend, neither of them mattered. 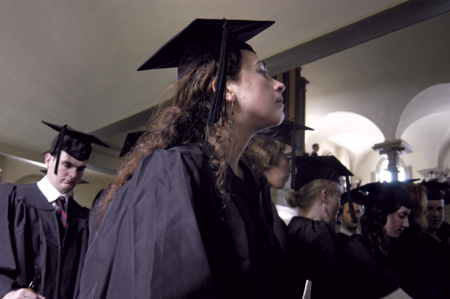 The real stars made a brief first appearance on Saturday afternoon. Clad in dark caps and gowns (and who knows what underneath), they walked down College Street and into the First Baptist Church in America, where Juliet García, president of the University of Texas at Brownsville, addressed them about finding their noble purpose. Other stars had supporting roles throughout the weekend. Former Democratic U.S. Senator Claiborne Pell received the Susan Colber Rosenberger Medal, Brown’s highest faculty honor. TV journalist Jane Pauley gave a Saturday forum on balancing motherhood with a media career. Former Federal Reserve chaiman Paul Volcker spoke about eliminating corruption at the United Nations. Eight eminent and deserving men and women received honoray degrees.

Heady stuff. But as is fitting at any spectacle, the supporting cast receded as the drama climaxed, in this case on a hot, sunny Sunday morning, when the entire firmament of stars—2,194 of them, to be exact—entered the College Green and scattered, sitting on folding chairs surrounded by grandparents, parents, brothers, sisters, aunts, uncle, friends—even children. They sat there and they shined.

In the following pages, the BAM tries to capture shards of their light. The pomp and circumstance of Commencement weekend may represent a continuing unfolding of tradition and history, but that is only the most obvious of what occurs. Commencement, like the pursuit of knowledge itself, is serious fun. Here’s what it looks like. 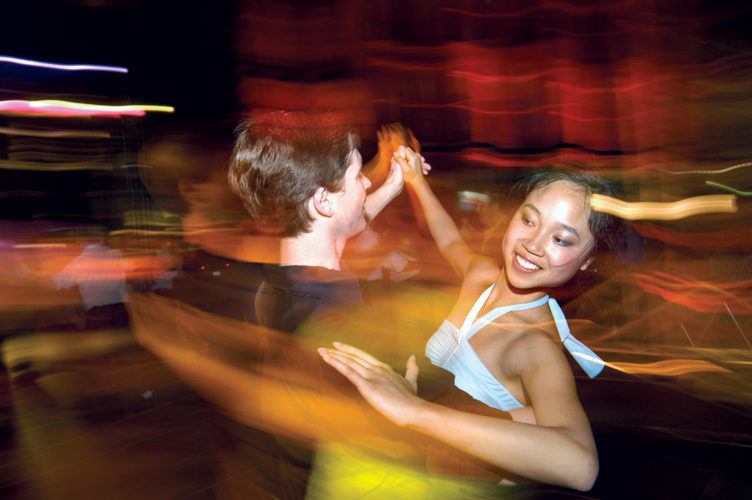 Departing Provost Robert Zimmer, who becomes president of the University of Chicago this summer, used his parting shot as the Graduate School’s Commencement speaker to argue that in a politically polarized society, a university must be vigilant about its role as “an umbrella under which debate and challenge can take place.” Expressing a strong opinion may be particularly difficult for new assistant professors trying to earn tenure, he admitted, but universities must have a role in the “political debate of the nation.” They must be safe settings, he maintained, for “relentless argument, debate, and challenge.” This role of a university, he said, “requires listening even when one is full of passion. It requires majorities and minorities to listen and be open.” 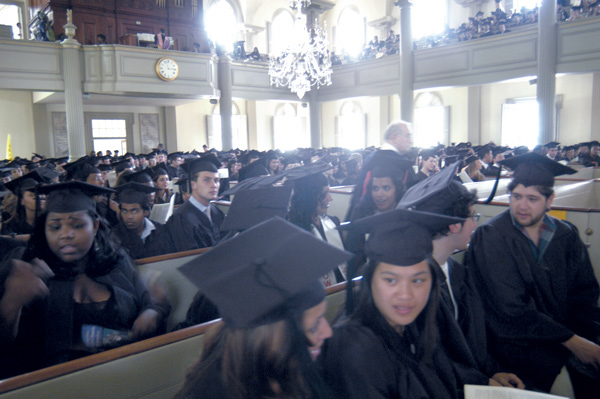 As he stepped back from the lectern, Zimmer grinned, noting that he anticipated disagreement and welcomes argument. 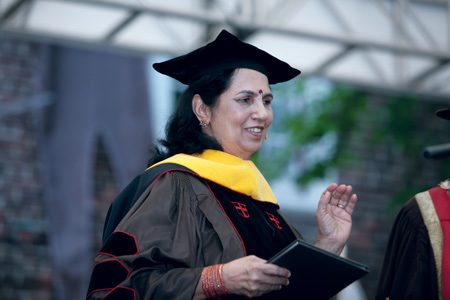 In India, a country of 1 billion people, more than 5 million are infected with HIV. In fact, India is home to one of the two largest national AIDS epidemics in the world (the other is in Africa). What makes India so vulnerable? Sunita Solomon, who heads a center in India for AIDS research, education, and treatment, said the greatest obstacles are cultural. The taboo associated with the disease there, she said, keeps Indians from disclosing they have the virus and from seeking treatment for it. Prevention is also difficult because of the cultural stigma associated with condom use.

Solomon, an honorary-degree recipient who spoke Saturday in Sayles Hall, said that 22 percent of those infected with HIV in India are housewives. “If we had first detected HIV in India in a baby,” she said, “maybe things would have been different. But it was in sex workers.” 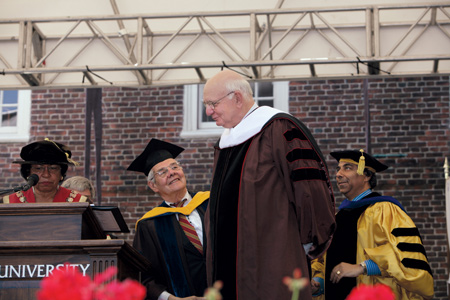 The short answer to “Is the U.N. Up to Its Job?” the title of the forum by former Fed chairman Paul Volcker is: maybe. Volcker, who was appointed Fed chair by both presidents Carter and Reagan, was asked two years ago by U.N. Secretary-General Kofi Annan to chair an independent committee investigating corruption allegations in the U.N. Oil-for-Food program. Begun in 1996, the program was to allow Iraq to sell just enough oil to keep its people fed.

Volcker, whose talk was the seventy-fifth Stephen A. Ogden Jr. ’60 Memorial Lecture on International Affairs, observed that the problem can be traced back to the role of the secretary general. According to the U.N.’s charter, he said, the secretary-general’s office is responsible for the administration of the organization: “But it has developed differently. The secretary has become chief diplomat of the world. Can you combine that function with overseeing the administrative detail?”

Volcker’s answer is no, and the Oil-for-Food program is exhibit A. “Iraq found ways to game the system,” he said. “All the rules for contractors, for example, were violated, largely for political reasons. And these failures were symptomatic of a lack of administrative leadership and discipline at the U.N. generally.”

Volcker recommends establishing a new chief-administrator office to free the secretary general to continue as the globe’s peacekeeper-in-chief. In addition he said, “the U.N. needs a very strong oversight body independent of the secretariat and the security council,” a permanent oversight board to whom auditors and investigators would report.

The extent of the bribery and kickbacks in the Oil for Food program surprised Volcker and led him to wonder how much of it goes on in other international institutions. “What does this say,” Volcker asked rhetorically, “about the state of corruption and money laundering in the global economy?” 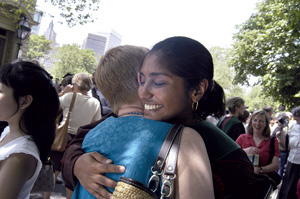 Jyothi Magraj Marbin at the medical school ceremony on Sunday.

While eight-nine sweaty students and their parents fanned themselves inside the First Unitarian Church on Sunday morning, speaker Geoffrey Canada delivered a decidedly depressing message—fighting for better health care for the poor is increasingly becoming a lost cause. Canada, an acclaimed advocate for inner-city children and president and chief executive officer of the Harlem Children’s Zone in New York City, bluntly told the graduates it was becoming harder and harder to triumph over the economic and political forces that condemn American children to spend their lives sick and impoverished. “I offer you a wondrous opportunity to join the losing side,” Canada said to much laughter. But he also offered some true words of inspiration. “We may not win the fight,” he said, “but as long as you are here, we will never stop fighting.”