When Americans began returning to Paris after World War II, they found it romantic and thrilling. Hollywood movies like Gigi and An American in Paris portrayed the City of Lights as the home of starving artists, bons vivants, and beautiful, carefree courtesans. It was as if the war, during which the Nazis blitzkrieg-ed France and executed thousands, had never happened. New Yorker writer Adam Gopnik, who spent five years reporting from Paris in the late 1990s, describes the phenomenon as a kind of “willed amnesia.” 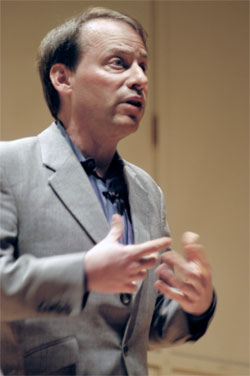 Gopnik, whose essays on his experiences in Paris were collected in the best-seller Paris to the Moon, spoke on campus in May about how, as he put it, “the American idea of Paris got invented.” Every generation of Americans, he said, has created a romanticized picture that often was only tangentially connected to reality. Gopnik has collected many of these visions in Americans in Paris: A Literary Anthology, which he edited.

According to Gopnik, eighteenth-century Americans perceived Paris as not only a place to learn proper bourgeois mores but also a destination “to drink, to have sex, to lose their bourgeois inhibitions.” Gopnik said these apparently contradictory ideas about Paris “are really quite complementary,” adding up to a city where “pleasure is taken and education is earned.”

By World War I, Gopnik said, Americans had come to see Paris as a “city of small pleasures”: eminently bourgeois and, in the tradition of Henry James, a place you loved that would never love you back. An ocean away from the Great War’s horrors, Americans saw the war as a “happy experience” in which the United States “entered into history,” while the French saw it as “the fundamental catastrophe of Western civilization.” You can see the consequences of these differing worldviews today, he said: Americans have become “hyper-militaristic,” while the French believe “the one thing you never want to do is leap into a military confrontation.” This is a more nuanced view than that of conservative commentators who eat freedom fries and argue that in Iraq the French lacked the courage of their democratic convictions while U.S. soldiers are willing to fight and die for what they believe in.

At the end of his talk, Gopnik was asked what he thought about the recent protests and riots in France by Muslims and students. He said that, like many of the French intellectuals he knows, he is of two minds: pessimistic because he believes France is suffering from numerous insoluble social problems but optimistic because its economy is thriving. While the French government may be paralyzed, he said, its relevance to ordinary citizens’ lives is diminishing. “I’ve heard lots of good reasons to despair and lots of reasons to hope,” he said. “Since there’s always reasons to despair, I choose to hope.”

Reader Responses to The Franco-American Divide