Who Stole the Pole?

The North Pole Was Here: Puzzles and Perils at the Top of the World by Andrew C. Revkin ’78 (Kingfisher). 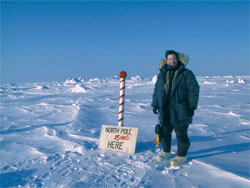 Andrew Revkin stands on thin ice, next to a sign scientists put up to indicate that the ice over the pole is drifting.

After eleven years of reporting on global environmental issues for the New York Times, Andrew Revkin is taking his message to kids. The author of the 1992 Global Warming: Understanding the Forecast, Revkin aims his new book, The North Pole Was Here, at preteens. It’s the first in a planned series of books by Times reporters aimed at children.

Refreshingly, Revkin avoids sounding polemical or overly catastrophic; this is no “We’ve wrecked the planet and if we don’t change our evil ways right now we’re doomed” tract. Like a good science teacher he re-creates for young readers the drama of scientific exploration and discovery. He frames his book as an adventure tale, basing it on a three-day trip he took to the North Pole in April 2003 to report on scientists who since 2001 have been studying temperatures and salinity in the Arctic Ocean and the thinning ice sheets that drift across it.

Into their story Revkin weaves a primer on global warming and the contribution of humans to its rise. He also intersperses chapters on the role of the North Pole in the human imagination, from legends of an unreachable land to the Age of Discovery to the systematic study of more recent times. Each chapter ends with an article or two reprinted (and modified slightly for a younger audience) from the Times. 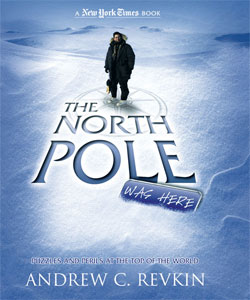 Revkin brings to his first book for young people the same crisp, clear writing readers have come to expect from his more than 1,000 newspaper articles on global environmental issues. He also adds the kind of personal touch that is absent from most daily newspaper journalism, describing, for example, his own excitement and fears about walking on a constantly shifting layer of ice only six to nine feet thick over a frigid ocean 14,000 feet deep.

Without being patronizing, he lays out the difficulty of testing hypotheses about the role of greenhouse gases on global warming. “Most science progresses through experiments,” he explains. “If you want to see if a certain chemical harms plants, you grow some plants that are exposed to the chemical and some that are not, as a ‘control.’ With the puzzle of global warming, however, the experiment is being run on the whole planet as humans add more greenhouse gases to the air. There is no identical earth without the changing gases to use as a control.”

Revkin describes the science behind the role of greenhouse gases in global warming in the gentlest of ways, trusting his readers to draw their own conclusions about what should be done. He believes the “only approach to the climate issue that will galvanize significant action is for grown-ups and their kids and grandkids to explore it ensemble.” His book is an excellent starting point for that discussion.

Tim Tibbitts is a freelance writer in Shaker Heights, Ohio.

Reader Responses to Who Stole the Pole?