The Path He Took

W. Duncan Macmillan—a trustee emeritus whose legacy on the Brown campus includes the undergraduate sciences building that bears his name—died October 31 after fighting cancer and heart disease for three years. He was 76. 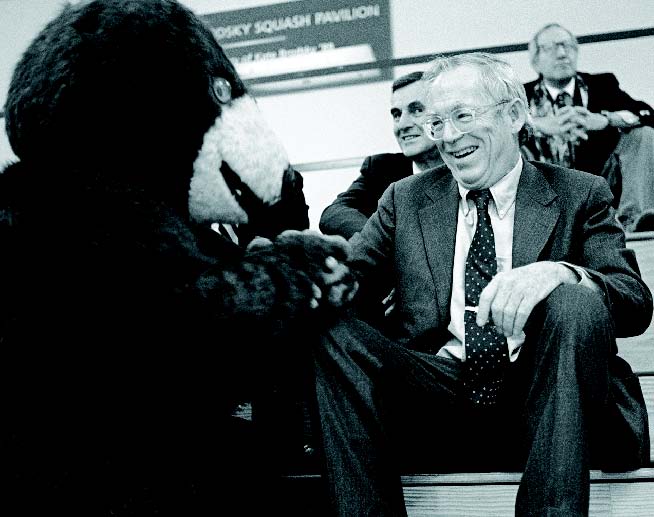 Duncan MacMillan came to Brown from Minnesota in 1949 expecting to play ice hockey and major in geology, but a conversation with the team’s faculty adviser, Professor of Classics John Rowe Workman, changed his academic course. Geology conflicted with hockey practice, Workman observed. Better to study the classics.

“One of the things I learned at Brown,” MacMillan later said, “is that because a civilization is ancient, it is not necessarily irrelevant. I learned that foreign languages and cultures, whether modern or ancient, enrich us all and make us better and wiser human beings in whatever age we live and whatever path our lives may take.”

MacMillan was born and raised in Wayzata, Minnesota, home of the Cargill Corporation, the grain-distribution company founded by his great-grandfather, W. W. Cargill, and later run by Duncan’s father, John H. MacMillan. Duncan MacMillan served as a Cargill director for more than thirty years. As a boy he worked at Cargill during summer vacations, and he was hired as an assistant grain merchant after college, but he spent the bulk of his career in other family-owned concerns.

He helped establish Cargill’s grain-trading subsidiary, Tradex, International, S.A., in 1955, and subsequently worked in Montreal and Geneva. In 1964 he returned to Wayzata as president of Waycrosse, Inc., another family-owned corporation, where he led the purchase of companies such as North Star Steel, AmeriBank, AmeriGroup, Pierce County Bank, Willmar Manufacturing, and Silent Knight Security Systems.

He retired in 1997 and turned his considerable energies to such avocations as BenNevis Inc., a customer-relations management firm, and the Afton Historical Society Press, which published his book, MacMillan the American Grain Family: An Illustrated Biography. Devoted to his clan, he sometimes wore tartans to formal affairs. He enjoyed boating, tennis, squash, skiing, hockey, and hunting. He developed the Rush Creek Golf Club and Golf Academy and belonged to the Minnetonka Yacht Club and the Woodhill Country Club, all in Minnesota.

In 1974 MacMillan was tapped for the first of three six-year terms as a Brown trustee; even as a trustee emeritus he continued to advise Brown presidents. The University awarded him an honorary doctor of laws in 1993 and a Brown Bear Award for lifelong service last fall. He was also a trustee of the Blake School in Minnesota and the Berkshire School in Sheffield, Massachusetts, where he attended boarding school.

His first wife, Sarah Stevens, died in 1995; their four daughters survive him, as do his second wife, Nivin, her two children, and nine grandchildren, including Jessica Chaney ’07. Other surviving relatives include his brother, sister, niece Anne Pedrero ’91, and grandnieces Ashley MacMillan ’08 and Charlotte MacMillan ’09.

Reader Responses to The Path He Took