The Trip From Hell

Brutal Journey: The Epic Story of the First Crossing of North America by Paul Schneider ’84 (Henry Holt and Company).

In 1528, the Spanish explorer Pánfilo de Narváez sailed across the Atlantic with a force of several hundred conquistadors and slaves and with ten women. His mission was to conquer the vast territory north of Mexico. The group arrived near Tampa Bay, Florida, in 1528, battered by tropical storms. Then they set off on a madcap scheme to tame a continent and drain it of riches. 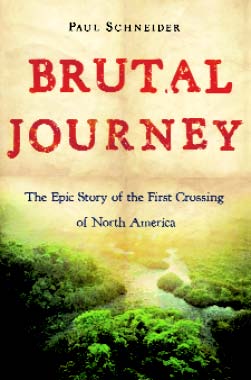 They had, however, the wrong supplies, no clue where they were or where they were headed, and virtually no defense against the local native populations and the staggering natural forces—bugs, swamps, and lack of freshwater—arrayed against their conquest. For the next eight years the dwindling group stumbled counterclockwise past the mouth of the Mississippi River, south into Texas, and eventually along the Rio Grande and over the mountains into Mexico.

If you’ve ever swatted mosquitoes or been lost, magnify that distress exponentially and you might begin to imagine what Narváez and the expedition’s treasurer, Cabeza de Vaca, endured. In fact, only Cabeza de Vaca and three others survived.

In writing this history, Paul Schneider has undertaken a difficult move of his own. There are only two historical documents on which to base the history. Cabeza de Vaca published his own narrative six years after the trip, but eager to salvage his reputation and try again for fortune in the New World, he is not the most reliable of sources. The only other contemporary report is a paraphrase of the lost, original joint account by the trip’s survivors.

Based on such limited sources, Brutal Journey feels false when it tries to imagine emotions the travelers experienced. We read, for instance, that as Narváez surveyed his fleet and the crowds gathered on the dock to wish it off, “he was in a fine mood.” And that upon landing, “it was good to stand again on dry land with the weight of a helmet on his head and chain mail on his chest.”

Another weakness is the book’s inclusion of just three maps, none particularly detailed. Readers fascinated by geography will be aggravated as they try to follow along.

Still, there are moments of delight. We learn about Floridians skilled enough to canoe to the Bahamas, the terror of being lost in the swamps while natives shoot arrows from cover, and the ingenuity of travelers who melted their armor into nails to construct wobbly ships on which to float through the Gulf of Mexico. In the Texas passages, Schneider includes a sustained discussion of the cultural interactions with native groups, some of whom brutalized the conquerors and some of whom sheltered them.

The book’s larger subtext may be one about the “inversion of expectations” experienced by the would-be exploiters. The survivors had to drop their ethnocentrism and either understand or adopt native skills and qualities. By the end of his journey, Cabeza de Vaca reports that the natives “told us how other times the Christians had entered the land and had destroyed and burned the villages and carried off half the men and all the women and boys.” Cabeza de Vaca’s “transformation from loyal royal treasurer to vocal critic of his fellow conquistadors” was temporary, however. After he returned to Spain, “he never questioned Spain’s right to use its military superiority to spread its ideals to the oppressed evildoers and make a little profit too.” The connection with Iraq is impossible to miss, and so if this book can stir the reader’s imagination, offer some glimpse of the challenges of sixteenth-century North America, and remind us of our own age of conquest, it may well be worth the time to explore it.

Reader Responses to The Trip From Hell