It’s Not the Economy, Stupid

In his Bobos in Paradise, New York Times columnist David Brooks described a latté-sipping, SUV-driving, public-radio-listening “new upper class”—an elite that merges bohemian and bourgeois cultures. In early March, Brooks arrived on campus to deliver the opening speech of the annual Brown/Providence Journal public affairs conference, whose topic was the persistence of class in American culture. 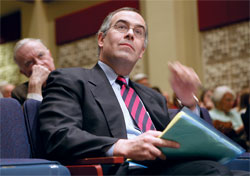 Brooks got a warm reception in the jam-packed Salomon Center, where he argued that the rich don’t exploit the poor, they just outperform them. The reason, he said, is “cultural capital”: rich parents teach their kids how to use a large vocabulary, how to fill out a college application, how to speak confidently to doctors, teachers, and employers. He said that even though admission to an Ivy League school depends more on SAT scores than on ancestral lines, universities remain “engines of inequality” because working-class kids can’t compete in the admission process—they don’t have the cultural cash. “Social class is what we should think about,” he said, “not economic class.”

Brooks added that “aspirational capital” is something most self-made millionaires have in common. “Someone told them they were too stupid to succeed,” he said, “and they set out to prove the bastard wrong.”

Two days later, Brooks explored the theme in his Times column, writing about the work of sociologist Annette Lareau. According to her research, he wrote, upper-middle-class parents are happy to negotiate over chores and to micromanage their kids’ time. “Children raised this way,” Brooks wrote, “know how to talk casually with adults, how to use words to shape how people view them, how to perform before audiences and look people in the eye.” The working-class parents Lareau observed issued more orders to their children and allowed more free time. Their children whined less than their wealthier peers and seemed more relaxed. “But these children,” he wrote, “were not as well prepared for the world of organizations and adulthood.”

On the second night of the conference, Brooks took part in a panel with Jared Bernstein of the Economic Policy Institute, a nonpartisan think-tank in Washington, D.C., and Louisiana state representative Karen Carter, a Democrat from New Orleans. The moderator was Glenn Loury, a professor of economics at Brown.

This time around, Brooks offered a solution to some of the problems he outlined, calling for a return to a view of government first espoused by Alexander Hamilton. “It was not anti-government or pro-government,” he said. “It was using government to give people the tools they need to succeed.”

When Bernstein insisted that economics was still the leading factor determining class and status, Brooks stuck to his guns. “I’m sorry to sound like Johnny One Note,” he said, “but culture matters.”

Reader Responses to It’s Not the Economy, Stupid