These days writers of memoirs are coming under heavy scrutiny—as they should. But we do not possess the past. All we have is memory, and we must work with what we have. I mention all this because I am going to share with you a memory of an event from the early years of my career as a teacher of literature, and I want to acknowledge a certain fuzziness in the story I will tell. The main event happened in 1962 or 1963, when I was in my first academic job, in the English department at the University of Virginia. As you see, fuzziness already. I am uncertain of the year. As is so often the case with memory, some things are vivid, some are unclear, and some are just missing. And sometimes, I believe, the ones that are vivid are no more accurate than the ones that are not. At any rate, all this is relevant to the story I am going to tell, as you will see, because the story is about memory and the re-creation of the past. 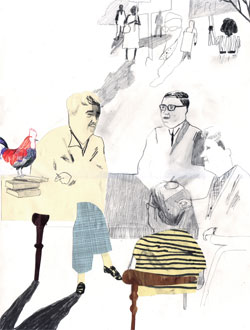 The main event in this narrative is a visit by William Faulkner to my undergraduate honors seminar in the novel, on a day when we were discussing Absalom, Absalom! I had occasion recently to mention this episode in the preface to a book of mine, and I have been getting questions about it ever since, including one from the editor of this magazine—which is why my response comes here and now. People want to know what this experience was like, what Mr. Faulkner was like, how he responded to students—things of that sort. I will try to answer these questions, but first I need to provide a bit of background on that moment in our history as it played out in and around the university that Thomas Jefferson designed and founded many years before.

I started teaching at the University of Virginia in 1959, fresh out of graduate school at Cornell, where I had contemplated writing a dissertation on Joseph Conrad and William Faulkner before dropping that idea when offered the newly acquired papers of James Joyce to catalog. Faulkner was a star in my firmament before I ever got to shake his hand or chat with him at a party. He had been a writer in residence at the UVA for some years before I got there, spending half the year on campus and dutifully allowing conversations with faculty to be recorded and published. I had read a volume of these before I even arrived. But these were not quiet times in that part of the world.

I remember being interviewed in a hotel room at the meeting of the Modern Language Association by a disgruntled professor who waxed eloquent on the subject of what was called massive resistance—the decision to close the public schools in Charlottesville rather than integrate them as the law had begun to require. The professor left the University of Virginia and I arrived, after being assured that the schools were indeed reopening, so that my two little ones could attend them. But other things were going on. There were no female students at Virginia in those days, and at football games black people sat in the end zone and whites along the side of the field. At the local movie theater all black people were required to sit in the balcony, and I soon got involved a controversial exchange in the newspaper with someone who insisted that this was necessary because they smelled bad. I remember responding that some white people smelled worse than some black people, and suggesting that a smellometer be put in the lobby and everyone with a high score be sent upstairs.

As a Yankee, born in Brooklyn, educated in New York and Connecticut, I was really in no position to pontificate about all this to the locals. But I had white Southern colleagues who played a leading role in the struggle over civil rights, sitting in with blacks at local diners and generally proving that not all Southerners were bigoted or cowardly. The position of Faulkner in all this was interesting. Any serious reader of his novels knew that he did not think white folks were necessarily smarter, more sensitive, or morally superior to blacks. I remember asking him at a conference about his book Go Down, Moses, which he always called a novel, though it looked to many people like a collection of stories about different people over a long period of time. They had stopped tape-recording his conferences by this time, and I think he was a bit more forthcoming because of that. In any case, he explained patiently to me that the book was unified by taking place entirely on the same bit of territory, and by having as its protagonist the Negro race as a whole. As the title implied, it was about their evolution toward freedom and equality.

I should point out that Faulkner took his obligations as writer in residence seriously, interpreting them as a responsibility toward the students in particular. During this struggle over civil rights he spoke at least once to a group of undergraduates about integration. What I learned about that meeting suggests that he told them that integration was right and should happen but that he thought it needed some time and shouldn’t be hurried. As we know now, it came pretty fast, but with many gaps and difficulties that helped keep racism alive and well, with politicians in the South and elsewhere playing the race card for years afterward with varying degrees of subtlety. I don’t want to suggest that it should have come more slowly, only to point out that Faulkner was right to be concerned about the pace of the process and how that might affect the results.

It was his concern for the students, and his commitment to them, however, that brought him to my seminar. As I recall, this visit was arranged by Joe Blotner, a colleague who had generally squired Mr. Faulkner around the university, tape-recorded his interviews, and ultimately, some years after Faulkner’s death, published a major biography of him. Mr. Faulkner, as we called him, liked Joe and was at ease with him and his family. Virginia was a rather formal place in those days. We referred to the founder as Mr. Jefferson, and my department chair told his faculty that we should dress as well as the students. (I remember asking him if he meant qualitatively or quantitatively, and he said he meant we should wear coats and ties. This gentleman, who was a graduate of Brown, by the way, was also my landlord, and when he promoted me from instructor to assistant professor, he actually raised my rent.)

On the big day, Mr. Faulkner came to Joe’s office, as I recall, and I met him there and walked him down the hall to the seminar room, where he joined us around a large table. He had reread the book, he said, so he could respond to questions about it. When the students started in, he was as forthcoming and serious as anyone might wish. At social events, I should point out, this was notoriously not the case. People trying to talk literature with him over a glass of bourbon were rebuffed, usually politely. I remember talking to him at such gatherings about things like cockfighting—about which I knew nothing, but I was trying to learn as much as I could about Southern culture, and what better teacher could one have? But he was not the same reticent country gentleman in the seminar room with students.

If I were the sort of memoirist who gets on Oprah, I would probably remember every detail of that class, with advantages, but it is all a blur in my memory, except that I recall my own major question, which I saved until the students had satisfied to some extent their own thirst for knowledge. In Absalom, Absalom! we learn about the past first from those closest to the events and gradually from those who are farthest, until at the end what we are getting is the imaginative reconstruction of that past by two college students who have a large emotional investment in what happened and what it meant. I told Mr. Faulkner that it seemed to me the further away we got from the eyewitnesses and the deeper we got into the imaginative reconstruction of events by those who were never near them, the closer we were coming to the truth. All I remember is that he confirmed my view, or seemed to. And it is a literary view, the view of an artist, not a country gentleman. Mr. Faulkner, as it happened, could play both of those roles perfectly, and I am grateful that I had a chance to be an eyewitness to them, though I remain cautious about claiming that my memory speaks the truth about him.

One thing I do know. The books are great books, and they are still very much alive. And Mr. Faulkner was a great writer—one of the greatest we have ever had. It was a privilege to chat with him socially and a thrill to hear him talk seriously about literature as an art. Being an English teacher has its moments, after all.

Robert Scholes is a research professor of modern culture and media and Andrew W. Mellon Professor of Humanities Emeritus. His new book, Paradoxy of Modernism, was published in March.