The (Computer) Revolution to Come

When Andy Hertzfeld ’75 returned to his alma mater in the early 1980s, it wasn’t as the revered tech guru he would soon become, but as a traveling salesman. Hertzfeld, along with his boss, had come east from California, hoping to get someone to buy the computers they’d recently designed. 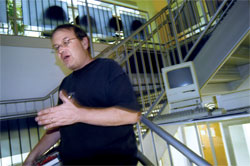 Andy Hertzfeld with the Mac that changed computing.

Brown’s computer scientists were intrigued, but the department had just invested in workstation computers made by the now defunct company Apollo. Hertzfeld’s team argued that the Apollos cost tens of thousands of dollars each, displayed only text, not graphics, and were the size of a small refrigerator. Their new devices, in contrast, cost just a few thousand dollars, featured a slick graphical user interface, and were small enough to tote around in a canvas bag. Brown said no, thanks. Although in-trigued, researchers needed something more powerful than what this unkempt, shaggy-haired crew was hawking.

As it turned out, the invention Hertzfeld and company were selling was the Apple Macintosh, the personal computer that would revolutionize the way ordinary people interact with technology. And the boss who accompanied Hertzfeld that day was Steve Jobs, Apple’s legendary cofounder.

Hertzfeld, now fifty-three, came to Brown in mid-March to describe those early, heady days at Apple, where he was largely responsible for designing the Mac’s operating system. Unprecedented, it featured “windows”—one for each program or document you were working on—and you could navigate among these windows and resize them with a mouse. Computers had hitherto been accessible mostly to scientists and programmers. Now, thanks to Hertzfeld’s OS, just about anybody could use one.

In his 2004 book, Revolution in The Valley: The Insanely Great Story of How the Mac Was Made, Hertzfeld reminisces about the early days of Apple (some of the anecdotes are available at his Web site, www.folklore.org). He joined the team in 1979, just a year and a half after he’d plunked down three quarters of his life savings on an Apple II, and, he says, “fell in love with it.” The company he joined included Jobs and cofounder Stephen Wozniak, a.k.a. “Woz,” whom Hertzfeld describes as a “creative madman.” “It was like ascending Mount Olympus,” he says. “I finally got to work with my heroes.”

In his talk to Brown students and faculty, Hertzfeld described a wild, chaotic workplace where these budding geniuses relaxed by playing the video game Defender and held competitions to see who could break the copyright protection on software the fastest. But what really gave the crew their spark was Jobs’s insistence that “we regard ourselves as artists,” Hertzfeld said. “We were so passionate about what we were doing. We were doing it out of love.”

Hertzfeld left Apple in 1984 and is now a software developer for Google, which he regards as a similar company. Like Apple, he says, Google emphasizes innovation and recognizes that “simple is really what the users want and need.”

Hertzfeld believes it’s just a matter of time before another group of computer visionaries comes up with an advance as groundbreaking as the Mac. “The underlying force is Moore’s law,” he says. “With the capabilities of computers doubling every year and a half, the opportunities double that much as well. Another revolution is definitely going to happen.”

Reader Responses to The (Computer) Revolution to Come