The gift under discussion comes from the Providence-based Warren Alpert Foundation, which in January pledged $100 million to Brown’s medical school. On March 5, Warren Alpert, the entrepreneur who started the foundation, died of heart failure at age eighty-six. In a statement, President Ruth Simmons expressed her gratitude for his philanthropy, which, she said, “will help educate generations of young physicians at the University.” 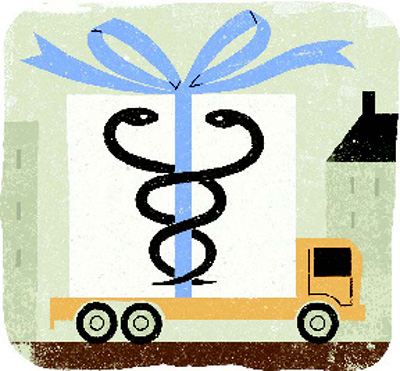 The Alpert Foundation has given millions to both Harvard and Mount Sinai medical schools, but the Brown gift dwarfs those previous donations and matches the largest single gift Brown has ever received, from the late Sidney E. Frank ’42 in 2004. “This is a major milestone in our development,” Dean Adashi says.

Alpert’s holding company, the Providence-based Warren Equities, owns the convenience-store chain XtraMart, numerous oil and gas distributors, and a raft of other retail and wholesale businesses operating in the northeast. It is valued at more than $1 billion and is annually listed by Forbes as one of the nation’s top 500 privately owned companies.

On January 18, the Brown Corporation voted to accept the gift and to rename the medical school as the Warren Alpert Medical School at Brown University. A significant portion of the donation will go toward constructing a new facility for the school. Its current location on College Hill forces students and faculty to commute back and forth between the campus and the seven teaching hospitals. Adashi says locating the school in a single building closer to three of the main teaching hospitals—Women & Infants, Hasbro Children’s, and Rhode Island Hospital—“will create an identity for the medical school so that you can actually point a finger and say, ‘here is the building.’” He also predicts the new structure will help Brown compete for students. “Think of it from the point of view of a prospective medical student who comes for an interview,” Adashi says. “Three to five years from now you’ll be showing them an extraordinary building with state-of-the-art facilities that is immediately adjacent to three major hospitals. That says something to the student.”

The rest of the donation will support scholarships, biomedical research, faculty recruitment, two new endowed professorships, and an endowment to fund faculty-designed innovations in medical education.

Brown’s medical school is a mere thirty-five years old, a baby compared to Harvard (225) or Tufts (114) medical schools. The latest U.S.News & World Report rating of medical schools ranked Brown thirty-eighth in research. The other major ratings system ranks medical schools by funds they have received from the National Institutes of Health. In 2005, the most recent year for which figures are available, Brown ranked 71 out of 123 on this list.

Three years ago, without specifying which ranking they were referring to, the Corporation announced that moving the medical school into the top quartile was a top priority for Brown. “We think this [donation] could put the school in the top ten,” says Herbert Kaplan, the Alpert Foundation’s president.

Adashi agrees. “We’ve already come a long, long way,” he says. “At one point or another, we’d be delighted to be in the top ten and we’re all going to work toward that.”

The $100 million gift comes as Brown has begun an ambitious expansion of its life sciences programs. The medical school plans to expand its enrollment by a third to 400 by 2011. Some nineteen new tenure-track professors have been hired in the biological sciences, public health, and medicine; another twenty hires are expected. Last fall also saw the opening of the $95 million Sidney E. Frank Hall for Life Sciences.

By all accounts, the Alpert Foundation’s decision to give to Brown was quick. Neil Steinberg, Brown’s vice president of development, says the first meeting took place last summer over lunch at the University’s Faculty Club. In October, Steinberg says, “We made it clear to them that there were naming opportunities at the medical school.” It helped that Steinberg, who worked at Fleet Bank (now Bank of America) before coming to Brown, had previously served as the banker for Warren Equities. He knew Alpert and the foundation’s top officials fairly well.

On October 31, Steinberg and his team presented the foundation with a proposal. That was the first time the $100 million figure was mentioned, and the foundation officials “responded enthusiastically,” Steinberg says. The figure is in line with the amounts contributors elsewhere have given medical schools in exchange for naming rights. For instance, the University of Southern California’s medical school was renamed in honor of the Keck Foundation after it donated $110 million in 1999. UCLA’s medical school became the David Geffen School of Medicine after the media mogul gave $200 million in 2002.

Alpert did not attend the press conference announcing his gift to Brown. According to Kaplan, who heads Warren Equities as well as the foundation, Alpert was suffering from a respiratory illness and was no longer able to leave his home in New York. In previous media interviews, Alpert has said he was born into poverty in Chelsea, Massachusetts, in 1920 to Lithuanian immigrants, then served in military intelligence during World War II. He earned a Purple Heart for his actions on Omaha Beach.

When he got out of the army, he received an MBA at Harvard, and in 1950, with “$1,000 and a used car” as he once put it, he opened a dry-goods store. Today, Warren Equities employs more than 2,100 people in eleven states. “Life has been very good to him, and he believes in giving it back,” Kaplan said shortly before Alpert’s death.

A renowned workaholic, Alpert never married and has no children. His mother died from Alzheimer’s disease and his father from a heart condition. The Alpert Foundation’s giving has focused on funding researchers whose work could provide a cure for these and other diseases. “I want cures, cures for Alzheimer’s disease, cancer, AIDS,” Alpert told the New York Times in 1993.

Reader Responses to A Major Milestone