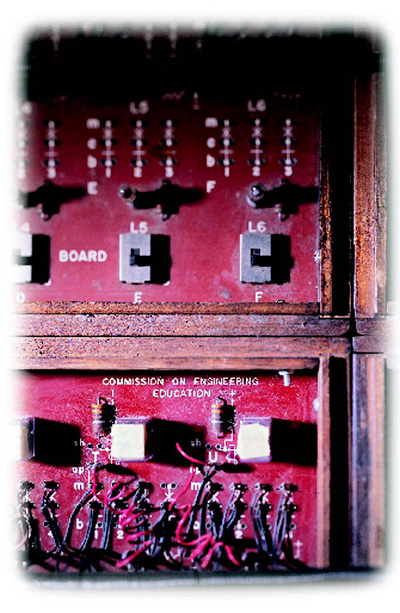 This heap of wires and circuitry hails from the prehistoric period of the digital age—the 1970s—and was used as a teaching tool in Brown’s introductory computer science class. Hand-built by a few students, it’s no more than a series of connected relays that, when properly programmed, function as logic boards able to compute basic arithmetical and logic functions. But it seemed like magic.

“We built the most elementary logic circuits and then showed the students how you could combine them to become a small digital computer,” says computer science professor Andy van Dam. It was a tradition for van Dam to put on a wizard’s hat and give the computer a simple program to run. The relays would click and clack as electricity passed from one to the other, enabling students to witness in real-time how the logic boards worked.

“You could see it and you could hear it,” Van Dam says. If he gave the computer a bigger number than it could handle, an overflow relay would sound a car horn and light a magnesium flare. It was the perfect way to end class.

The logic boards now hang on the wall of the computer science department along with other relics from the earliest days of the personal computer revolution, reminders of how far we’ve come.

Reader Responses to Circuits of Magic