“We are a family—one with a really long, crazy chain of connection,” bassist Brigham Brough ’05 says with a laugh. On tour with the band Elvis Perkins in Dearland, Brough is sitting at a back table in New York City’s famous Katz’s Deli with the band’s drummer, Nicholas Kinsey ’06. They’re explaining how their music-centric friendship began during their first year at Brown. 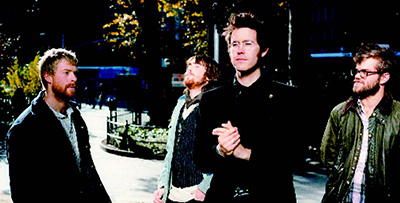 Introduced by Wyndham Boylan-Garnett, a mutual childhood friend who was then enrolled at Bard College, the two Brown students immediately hit it off. Then in 2004 Boylan-Garnett introduced them to Elvis Perkins ’95, another old friend who was taking classes at Brown after a long leave of absence, part of it spent in Los Angeles writing songs. In 2005 the friends rented a house together in North Smithfield, Rhode Island, and began to play music together.

Since then, the friendship has been remarkably fruitful. After weighing multiple offers, last fall Perkins and his bandmates signed with the eclectic independent label XL Recordings, which has launched such influential acts as the White Stripes and Thom Yorke. XL Recordings released Perkins’s self-produced debut CD, Ash Wednesday, in February, and the band has been touring nonstop across the United States and Europe.

Critics tend to compare Perkins to Leonard Cohen, Jeff Buckley, and Bob Dylan; the band members, however, describe their music as “folk and roll.” Whatever the provenance, the tender and graceful songs, all written by Perkins, are imbued with a quiet sadness. His father, actor Anthony Perkins, died of AIDS in 1992, and his mother, photographer Berry Berenson, was killed when her plane crashed into the World Trade Center on 9/11. The tracks on the CD are in chronological order, and they trace a journey through grief.

Onstage, however, the friends’ upbeat, playful attitude elevates Perkins’s somber lyrics and chords. Performing in New York City’s Lower East Side last fall, they wore mismatched blazers and scarves, and Kinsey smiled gleefully above the drum strapped to his belly. Brough danced with his mahogany upright bass, and Perkins moved elegantly to the melody. The crowd swayed as the band improvised and riffed on the winsome but melancholy tunes.

At Brown, Kinsey and Brough played together in jazz ensembles; they attended conservatory in Cuba for a semester during their junior year. Their love of jazz comes through onstage as they riff and improvise on Perkins’s more static lines.

Traveling and playing together nonstop since last summer has only made their friendship stronger, Kinsey and Brough say. And it certainly has not stalled their propensity to learn. “We’ve become connoisseurs of the Reuben,” says Kinsey, gazing down at the massive corned beef sandwich in front of him. “We eat them in every city.”

For tour dates, go to myspace.com/elvisperkins.

Reader Responses to Folk and Roll