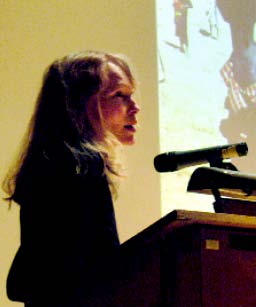 The words to playwright Winter Miller’s monologue “A Mother to Her Son” rang out as equally violent images from the traveling photography exhibition “Darfur/Darfur” were projected behind the stage in List auditorium on January 26. Marsha Z. West, director-in-residence at Brown’s Rites and Reason Theatre, narrated. Later in the program, actor and UNICEF goodwill ambassador Mia Farrow told the stories of the people shown on screen. “This woman watched as her children were burned alive in their hut,” Farrow said matter of factly.

Brought to campus by the student anti-genocide coalition STAND (Students Taking Action Now: Darfur) and the Watson Institute for International Studies, the photographs were projected on the walls of List’s entrance gallery for two days. The images were difficult to take, but the message of the show seems to be, “Don’t look away. Take note, and take action.”

To put the photos in context, Keith Brown of the Watson Institute briefly described the situation in Darfur, where the Sudanese government is backing militias known as the Janjaweed, providing weapons and encouraging them to annihilate the tribal Africans who have lived on the edge of the desert for centuries. Whole villages are being systematically burned and people mutilated, raped, and killed.

The photojournalists who contributed to the show included lyrical images as well—the silhouette of a woman in robes against the evening sky, a baby cradled in her mother’s arms—but nothing could soften the brutality.

Thankfully, the crowds of students attending the event brought some hope. They mobbed the building’s foyer, discussing the photographs, selling T-shirts, and manning tables where viewers could write letters to their senators and state representatives. “Darfur/Darfur” will travel to twenty-four cities in the next twenty-four months. For more information visit www.darfur.org.