"Paideia," philosopher and social critic Cornel West boomed out from the podium, and then, just in case the students and faculty gathered in Salomon Hall didn’t know how to spell it, added, “P-A-I-D-E-I-A.” 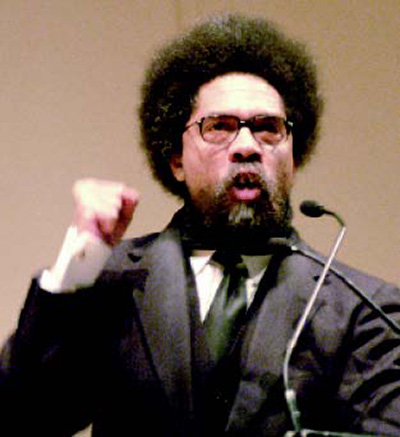 The Greek term for “education” or “learning” would hardly seem a topic likely to come up in a lecture intended to honor Martin Luther King Jr., but West repeated it over and over again during his talk at Brown in February. King challenged and educated Americans in a manner the Greeks would have identified with paideia, West said. King demanded they engage in self-improvement, self-reflection, and a profound confrontation with one’s own self. He asked Americans, “Who are you? Are you willing to look at your underside?” West described King as carrying on a long tradition in which African American thinkers, activists, and artists challenged America to own up to its hypocrisy and better itself.

West, a professor of religion at Princeton, then went on to argue that King “out-Socratesed Socrates”—that King infused the Greek thinker’s philosophy with “spirituality and compassion.” Socrates never wept, West said; King often did. King “had a love affair with a first-century Palestinian Jew named Jesus,” West said. King brought together “the best of Jerusalem and Athens.”

West’s seventeen books include the bestselling Race Matters and Democracy Matters, and range across a wide variety of topics—religion, politics, mortality, social justice, racism, and post-modernism, to name just a few—and his speech was similarly expansive in subject matter. He railed against Americans for tolerating such a high poverty rate in this country and talked about the necessity of confronting one’s own mortality. “You have to come to terms with learning how to die, which means learning how to live,” he said.

Since 9/11, West said, many American have felt “unprotected, vulnerable and hated, and subject to random violence” —an experience long familiar to African Americans.

So “what happens when Americans undergo their own form of ‘niggerization?’ ” West asked. He said he could only hope the response would be modeled on King’s teachings. “Martin refused to ever get in the gutter when so many people tried to put him in it,” West said. “He would never return bigotry with bigotry.”

During the question and answer period, President Ruth Simmons, who along with Providence mayor David Cicilline ’83 was in attendance, asked West about a new record album he has coming out with rappers Talib Kweli and KRS-One. West said it’s “a hell of a CD.” His previous rap album provoked a dispute with former Harvard president Lawrence Summers in 2002. At the time, West said Summers had told him to focus more on research and less on outside activities like the rap album. West promptly left Harvard for Princeton. During his speech, West did not appear worried that his latest musical effort would cause a similar dust-up.