Household Gods: The British and Their Possessions by Associate Professor of History Deborah Cohen (Yale).

Several years ago, shortly after my (very American) grandmother died, a moving van delivered to my house an entire roomful of her furniture. I assembled the black Hitchcock bedsteads in my guest room and smoothed her custom-made bedskirts and coverlets into place, then hung her black-and-gilt-framed horse prints over the beds. As I decorated, I half expected her to walk through the door and give my work the once-over. Yes, these were her things, but even more these things were her. She picked them, and they in turn embodied her. 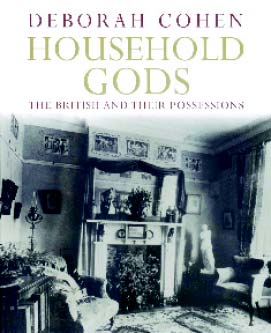 How is it that people’s selves got so tangled up with their stuff? Answers to that question pervade Associate Professor of History Deborah Cohen’s Household Gods: The British and Their Possessions. Spanning the century that began with the development of mass manufacture in the 1830s and ended with modernism, the book traces middle-class Britain’s shift from Puritanical austerity through the late nineteenth-century mania for decorative self-expression, to the timid quest for good taste that followed World War I. People’s stuff, it turns out, says a lot about them.

In the early 1800s evangelical Britons shunned ostentation, fearing that accumulating material goods would land them a hot seat in the afterlife. But the clergy softened their line by midcentury, and the Victorians rationalized their infatuation with decor by ascribing moral powers to it. Cohen quotes a Baptist minister who preached in the 1860s: “We have left the old Puritan error. We no longer despise the beautiful and artistic, but claim them as divine things and enlist them in divine service.” A ten-piece Gothic dining set, clergymen assured worshipers, promoted good character. It’s an easy notion to mock, until you consider the current fashion for feng shui, Cohen points out.

To sate the growing middle class’s appetite for furnishings, mammoth department stores opened with display rooms to show shoppers how to use the newest styles. Home magazines ran columns by “lady art advisors” to help readers avoid the pitfalls of bad decorating. Like a latter-day Martha Stewart, one intrepid tastemaker, Mary Eliza Haweis, climbed a ladder to enliven her drab street with a scarlet-painted balcony; she instructed her readers to choose colors to complement their complexion. The home, she told them, should reflect the individual.

Cohen writes that because men held the purse strings and women were largely housebound, a woman’s sense of self became increasingly bound up in decorating. Cohen quotes the indomitable Mrs. Haweis: “A beautiful woman reclining on a sofa becomes for a time a part of the sofa, and the sofa part of her.”

By the century’s end, Britons had traded in the moral rectitude of their Gothic dining sets for the creative and individualistic virtues of Art. Aesthetes like Dante Gabriel Rossetti and Oscar Wilde embodied the new fashion’s excesses, but even middle-class Edwardians sought out the exotic to assert their creativity. “Whether expressed in a stuffed crocodile card-holder or a wall stacked high with antler horns, quaintness signified the ability of the individual to mould the material world according to her fancy,” Cohen writes. One writer she quotes observed the following on a single street in a lower middle-class terrace: “Bamboo stands with ferns in giant egg-shells. Webster’s dictionary. A stuffed cockatoo. St. Paul’s Cathedral in white wax. Bust of the late Mr. Spurgeon. Portrait of Her Majesty. The Three Graces under glass shade.”

All that changed after World War II. With two of seven houses flattened or rendered uninhabitable by the bombing, and a million and a half survivors left homeless, Britons approached rebuilding cautiously. The Edwardian enthusiasm for individuality was replaced by a restrained emphasis on good taste—the decorating version of safety first, as Cohen puts it.

Household Gods is generously illustrated with photographs, advertisements, and paintings—images that are painstakingly matched to the text. Cohen’s research extends from the diaries of individual collectors to newspaper, magazine, and department store archives.

In her introduction and epilogue, she reflects on Britain’s current obsession with DIY shows, and the home improvement projects that have emptied the nation’s pews on Sunday mornings. She interviews a spectacularly successful reality show producer who longs for Martha Stewart greens but can’t summon the courage to paint his walls anything but white. In the glare of the television lights and international scrutiny, safety first may be back in style.